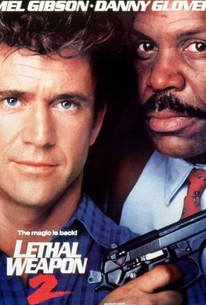 Critics Consensus: Lethal Weapon 2 may sport a thin plot typical of action fare, but its combination of humor and adrenaline, along with the chemistry between its leads, make this a playful, entertaining sequel.

Critics Consensus: Lethal Weapon 2 may sport a thin plot typical of action fare, but its combination of humor and adrenaline, along with the chemistry between its leads, make this a playful, entertaining sequel.

Critic Consensus: Lethal Weapon 2 may sport a thin plot typical of action fare, but its combination of humor and adrenaline, along with the chemistry between its leads, make this a playful, entertaining sequel.

This high-voltage sequel continues the adventures of Los Angeles detectives Riggs and Murtaugh (Oscar-winner Mel Gibson and Danny Glover) as they try to thwart a smuggling ring of blond South African "diplomats". Gibson finds romance this time around, and Academy Award- winner Joe Pesci ("GoodFellas," "My Cousin Vinnie") joins the team as fast-talking con artist Leo Getz. "At the Movies" calls this "...Pure dynamite!...a summer blockbuster with enough humor, excitement and action for two movies," while Roger Ebert praises "...Terrific... entertaining from one end to the other." Gene Shalit sums up all the cheers, calling it "...even more fun than the original ...directed at a mile a minute by Richard Donner...lots of laughs.

Burbank the Cat
as Itself

Sam the Dog
as Itself

Cynthia Burr
as Owner of Honda

Unlike most sequels Lethal Weapon 2 is neither predictable nor conventional. It's just pumped full of juice.

[T]here's a sense in which all these recent one-against-a-hundred cop and war thrillers represent the gaudy degeneration of the great tradition of the American action movie: substituting hardware for atmosphere...

Loaded with the usual elements, Lethal Weapon 2 benefits from a consistency of tone that was lacking in the first film.

By concentrating on the often frustrating, funny relationship between the three men, the film gains in humour but loses some of the momentum and panache which distinguished the original.

The rare buddy cop sequel that's better than the original film. Mel Gibson and Danny Glover are a hoot, expanding their partnership on screen, while director Richard Donner gives us more humor and action. [Full review in Spanish]

Director Richard Donner returns, with all of the original cast and more of the same buddy-cop chemistry and wild shenanigans that made the first feature so much fun.

If you don't mind your comic books being filled with incessant shootings, explosions, knifings, drownings, stranglings, car crashes, fires and the use of automatic nail drivers as weapons, it's a lot of fun.

Director Richard Donner accents humour rather than explosive action and the result is an oddly toned, cartoon-like adventure with the comedy elements making the nasty violence seem even more gratuitous.

As a sequel it is a notable risk to take the route of a more bitter and dark tone. [Full Review in Spanish]

A sequel that's just as good as the first one. It's the continuation of the adventures of the likable duo of Riggs and Murtaugh. It retains everything that made the first movie great and then some. Now we have Joe Pesci playing Leo Getz, the irritating yet harmless tag along. This one even packs some more emotional punches into it, turning it into a revenge-buddy cop-thriller. In the beginning, it drops you straight into the action and doesn't lose your attention for the rest of the film, ending on an emotional yet comical note. Lethal Weapon 2 is a great sequel. Letter Grade: A

Roger Murtaugh: It's just been revoked!  "The magic is back!" Lethal Weapon 2 is just as entertaining, just as fun, just as funny, and just as thrilling as the original. The first one is a classic, but I like this one as much, if not slightly more than the first. The character development from the first one is over, and now it is all action. This actually has more action than the original, and the original had a shit load of action. The two main actors are back, Mel Gibson and Danny Glover, along with a new, familiar face; that being Joe Pesci. Whenever Pesci is in a film, you know it's going to be all the more better for having his presence. He plays a different type of character than I am used to seeing from him, but still he's good.  This revolves around the same core plot as the first. Two cops are on a case. This time they are dealing with some South Africans. Also, Riggs falls in love with a secretary that's working for the South African diplomat. The story is even more engaging than the first, in my opinion. It has just about everything movies like this need. As far as buddy cop movies go, it's hard to beat the first two movies in this classic franchise, or it's two cops; Murtaugh and Riggs. This is the cop duo.  This has to be considered another staple of the genre. The first two movies in this series pretty much define the genre. They have all the violence, explosions, and chases that they could possibly throw into the runtime. This movie is slightly longer than the first, but you won't notice. It runs like a sprinter. It starts fast with a chase scene , and doesn't stop until it reaches the finish line. Martin Riggs: I'm not a cop tonight, Rog. This is personal.

Riggs and Murtaugh investigate the staff of a South African consulate who are hiding behind their diplomatic credentials to perpetrate organised crime. The same team who brought you the original formula of testosterone soaked, adolescent pleasing action and wise cracks returns with exactly the same blend of destruction, homophobic quips, female nudity, car chases and torture that scored so big with the box office. And if you thought the first film was a bit too subtle and sophisticated, it introduces exploding cars, machine guns, helicopter gunships and baddies who are not only evil, sadistic bastards, but RACIST, evil, sadistic bastards, right from the get go. And an exploding toilet. Patsy Kensit is a bit of an insipid love interest and Joe Pesci's constant nasal yammering irritates rather than amuses so it's not quite as good as the first film, but it's close enough to please its fans.