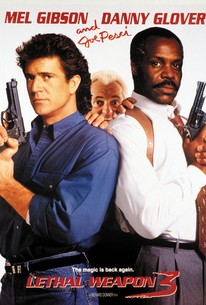 Critics Consensus: Murtaugh and Riggs remain an appealing partnership, but Lethal Weapon 3 struggles to give them a worthy new adventure as it cranks up the camp along with the mean-spiritedness.

Critics Consensus: Murtaugh and Riggs remain an appealing partnership, but Lethal Weapon 3 struggles to give them a worthy new adventure as it cranks up the camp along with the mean-spiritedness.

Critic Consensus: Murtaugh and Riggs remain an appealing partnership, but Lethal Weapon 3 struggles to give them a worthy new adventure as it cranks up the camp along with the mean-spiritedness.

Riggs and Murtaugh are back again. This time, they must stop a former cop who has become an arms dealer to L.A. street gangs.

Thomas A. Geas
as Man at Hamburger Stand

It's an action movie - we want explosions, not character development. And explosions and car chases are what we get.

A cheerfully amoral movie that cannily caters to and satirizes our passion for cinematic violence.

Manages to be highly entertaining and sanctions all its violence by making the bad guys so despicable that death seems to be the only solution.

What this sequel delivers is still the kind of high-speed roller-coaster action that producer Joel Silver's films often do so well.

The movie isn't going anywhere, but it goes in circles at top speed.

The humor and verve outdo the sappier moments, allowing it to be a satisfactory (but not superior) addition to the popular action/adventure series.

The idea of going round casually shooting the people who make life boring appeals to me. For this reason alone I get great satisfaction out of the Lethal Weapon formula.

This Richard Donner package is as shameless as its predecessors, but it also shows a certain growth, however schizoid.

While I'd loved Sarah Connor and Ripley before her, Lorna Cole became the number one heroine I'd wish to save me as a dude in distress.

Lethal Weapon 3 isn't a bad movie. It isn't as great as its two predecessors, but it's still pretty good. The problem with Lethal Weapon 3 is that it's forgettable. The witty banter, likable characters and exciting action are all still here, but it's too safe. What I mean by it being safe is that it steers to much into convention. It just seems like another Lethal Weapon movie but without the spark that made the first two great. There's a lot of good moments in this one and the ending shoot out features a great action set piece. But it relies too heavily on the events that happened in the first two movies and has little character development. Leo Getz is even more annoying in this one and seems a bit shoehorned in (at least they got rid of him early on). Letter Grade: B

Third entry in the Lethal Weapon franchise is a film with mixed results. I really have mixed opinions on the series, and personally, I thought the first was the best one. The first entry was the most exciting, most thrilling, and best written film in the entire series. Obviously sequels followed, and they all had the daunting task of outdoing the original, or predecessor. Lethal Weapon 3 is the second sequel to Lethal Weapon, and it's entertaining, but smething about this film bugs me. Like I said, I never really was that big a fan of these films, and preferred the first. I was more a Die Hard fan. The premise of this story is cool and Mel Gibson plays a cool, mean spirited tough cop. But there's just something about this film that just doesn't cut it for me. I really didn't like Joe Pesci in this film, and I thought he was irritating as hell, I consider his character to be the Jar Jar Binks of the Lethal Weapons. Lethal Weapon 3 nearly succeeds at being a passable sequel for me, but doesn't quite make it. thought the film could have been better, and with the interesting plot, Lethal Weapon 3 could have been a splendid film. But if Richard Donner would've selected his cast more closely, NOT write a part for Joe Pesci, this film would have been better. Entertaining, but not as good as I'd hope it would be.

The third part of Richard Donner's cop buddy series is the silliest. It puts a lot more emphasis on humor, but once again offers plenty of violence and ruthless villains. While the plot is merely a variation of the former two films it works mostly thanks to the great chemistry between Gibson and Glover. With plenty of laughs, gunfights and car chases not much can go wrong, after all.