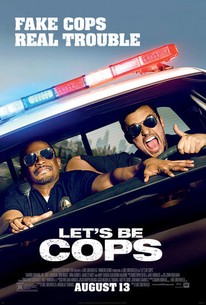 Critics Consensus: Damon Wayans, Jr. and Jake Johnson have comedic chemistry; unfortunately, Let's Be Cops fails to do anything with it.

Critics Consensus: Damon Wayans, Jr. and Jake Johnson have comedic chemistry; unfortunately, Let's Be Cops fails to do anything with it.

Critic Consensus: Damon Wayans, Jr. and Jake Johnson have comedic chemistry; unfortunately, Let's Be Cops fails to do anything with it.

It's the ultimate buddy cop movie except for one thing: they're not cops. When two struggling pals dress as police officers for a costume party, they become neighborhood sensations. But when these newly-minted "heroes" get tangled in a real life web of mobsters and dirty detectives, they must put their fake badges on the line. (c) Fox

Chen Tang
as The Real Chang
View All

News & Interviews for Let's Be Cops

View All Let's Be Cops News

Critic Reviews for Let's Be Cops

At this point Let's Be Cops loses much of its humour and starts looking like a film Liam Neeson will turn up in any time soon. That's a pity because the first half, about two doofuses playing police, is funny and occasionally sharp.

The depressingly putrid level of mainstream Hollywood comedy these days is on display in LET'S BE COPS.

The chillingly gung-ho darkness that Johnson lends his comic riffs would be the story, if only the director, Luke Greenfield, didn't play the movie solely for laughs, which are few and far between.

Short prison sentences for all involved would seem fair.

The dopey duo have a few decent lines, though Jonah Hill and Channing Tatum already showed us how to do the pseudo-cop routine in the Jump Street pictures.

Some nice comic beats and a sinister Andy Garcia turn make this far more watchable that the fratty conceit might suggest.

The high energy screwball tone of the first hour makes way for a low-rent looking Bad Boys homage in the final half-hour, becoming the very kind of movie it attempted to satirize in the first place.

Ends up being a mostly unfunny comedy about characters we don't particularly care about in a situation that doesn't really matter.

While not devoid of humorous moments, Let's Be Cops falls woefully short of the comedic heights of this year's 22 Jump Street.

Patrick Taylor
One Room With A View

Greenfield's abysmally judged copycop caper serves only as a timely reminder of how wrong comedies can go with a jobbing director, a charisma-less cast and a warped moral code.

This movie is pretty funny. I mean, if you have nothing else to do and a pretty good buzz going, you will laugh.

Audience Reviews for Let's Be Cops

An amusing tripe of a movie.

I think the start of this movie really sums up the present day extremely well. Wayans is pitching his new videogame idea to the company he works for in a board meeting, its an idea he feels is ripe fresh original and he's put a lot of effort into it. Straight off the bat his superiors immediately start to question his creation and asking what superpowers his main character has, is he a vampire and are there any zombies in it. I detect the mocking going on here and its very very accurate of the current times, everything is all about fecking superheroes and zombies. The idea here is actually really good and I'm amazed it hasn't been tapped before. I literately only recently heard of a case (in the UK I think it was) where a man was caught pretending to be a police officer in an unmarked car with a fake police ID card or something. He actually pulled over a real unmarked police car for speeding! he got carried away with his power trip...laugh out loud! This movie takes on that premise but naturally piles on the complications and consequences. Its very simple, the two main leads pretend to be police officers after dressing up for a party. They quickly realise being a cop has perks and benefits which leads them deeper and deeper into a world they don't belong. Now right away I think everyone knows what's gonna happen here, its bloody obvious and the movie doesn't really try to cover this fact. After all this is a silly frat house/frat pack type flick which you could easily see Kevin James, Adam Sandler, Will Ferrell or Ben Stiller starring in as either the straight guy or the crazy guy. So I think its pretty easy to predict what happens here, the pair abuse their fake powers with booze drugs girls, getting into clubs, driving like maniacs etc...etc...like I said its all very predictable. Right at the start the duo have a run in with some shady blokes which is blatantly the plot setup for the movie, you know they will run into these guys again as cops, get their own back, the shady blokes will turn out to be real criminals and in turn the duo will be drawn into a real cops n criminals situation. The main reason this movie does kinda work is purely down to the surprisingly good chemistry between the two leads. I've never heard of Jake Johnson but straight away he does what Kevin James is great at doing and that's playing the average Joe really well, he's a likable funny guy. Wayans isn't as funny as Johnson and unfortunately for him he looks way too much like his dad so you keep thinking it is his dad, and lets be honest...Damon Wayans Sr. is no top twenty movie star in any genre. But together these guys do click really well, they are both likable as they play off each other and its amusing to watch them bicker and fight. In the end I gotta give full points to Johnson, watching this guy get high on cop law enforcement thinking he's the real deal, actually buying a cop car, using the jargon etc...its priceless. Seriously though this role was made for Kevin James but I guess his track record is a tad tarnished at the mo from hangin out with Sandler too much. Heck they even pinched a small sketch from 'The King of Queens' where Johnson is playing football with some little kids and gets carried away taking things too seriously (good laugh though). I think this movie has similarities to James vehicle 'Mall Cop' in the sense that both films start off really well with a nice chuckle level but end up going too far. In this film the bad guy played by Brit actor D'Arcy is really quite nasty and would fit an actual adult action flick much better, he really is that intimidating. As the silly duo probe further into this criminal gang things get a bit darker as the bad guys get a bit meaner. There isn't any nasty violence or blood but the laughs tend to fall away as some scenarios get a little tense which felt a bit out of place. Again as with 'Mall Cop' the best bits are watching these guys trying to be real cops, using cop jargon they've seen from movies and TV, acting the fool, getting away with all kinds of shit and of course the obligatory scene where they eventually come face to face with some real cops. The thing is we all know if we could, we'd all probably do the same thing...if you could get away with it. Its that tense anarchic ride you know is wrong but it feels so good and its damn hilarious at the same time. I think both leads capture this simple thrill brilliantly as they do things we'd all wanna do ourselves. Yeah its completely stupid and childish most of the time but I think most people will come to expect that. Thing is the idea behind the movie isn't nonsense, it could happen quite easily which adds to the fun. Definitely a naughty fun time for grown ups which was quite unexpected truth be told, a nice surprise.

I think you need to be in the right mood for this movie in general, but it is funny enough and the stupid humor balances out with surprisingly intelligent nuances. I went in thinking I was going to watch a really awful movie, but it exceeded my expectations easily and is one of my favorite comedies of the summer.

The chemistry between these two leads is uncanny