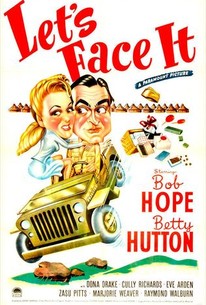 Let's Face It is adapted from the Broadway musical of the same name, which in turn was based on the old Norma Mitchell/Russell G. Medcraft stage chestnut The Cradle Snatchers. The basic story of three neglected wives who hire a trio of young men as professional companions is updated for the World War II era: The three young men are now lonely GIs. Bob Hope is the funniest member of the threesome engaged by the wives in order to make their wandering hubbies jealous. He is paired off with vivacious Betty Hutton, both of whom fight a complex situation-comedy plotline in order to find time for their expected specialties. Hope's best moment is a parody of the cigarette-lighting bit from Now, Voyager, in which he winds up with six burning cigarettes in his mouth. The stage version of Let's Face It was essentially a vehicle for Danny Kaye, who of course played the role essayed in the film by Bob Hope.

Nicco and Tanya
as Dance Team

George Meader
as Justice of the Peace

William B. Davidson
as Man in boat

Debbra Keith
as Betty
View All

Critic Reviews for Let's Face It

There are no critic reviews yet for Let's Face It. Keep checking Rotten Tomatoes for updates!

There are no featured reviews for Let's Face It at this time.