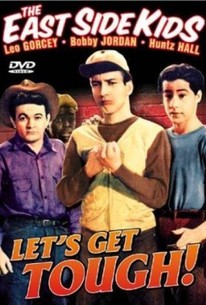 Set soon after the Japanese attack on Pearl Harbor, Let's Get Tough! opens with the East Side Kids -- Leo Gorcey, Huntz Hall, Bobby Jordan, David Gorcey, Sammy "Sunshine" Morrison, and Bobby Stone -- trying to enlist in the armed forces and getting turned down because they're not yet 18 years old. Eager to contribute and frustrated at not being allowed to help out in the national emergency, they decide to take action on their own when they see an argument between Kino, a Japanese dealer in antiques, and a local boy named Fritz Heinbach (Gabriel Dell). They try to run Kino out of his own store but instead, the shopkeeper runs them off, and the boys get a warning from "Pop" Stevens (Robert Armstrong), the local cop on the beat, to stay out of trouble. That night, however, they return intent on trashing Kino's store, only to find the man at his desk, stabbed to death. When they're pulled in by the police, the boys find out that Kino was a Chinese agent impersonating a Japanese, and trying to uncover a cell of saboteurs. The boys decide to investigate on their own after they hear rumors that Bill (Tom Brown), the brother of one of them, has been thrown out of the army for his un-American beliefs and has been seen hanging around Matsui, who is considered a potential suspect. They end up infiltrating a meeting of Japanese saboteurs and spies, and find an alliance between them and German immigrant Fritz Heinbach; Bill turns out to be an American agent working the same case as Kino, but they're all trapped, until one of the gang escapes to summon the police.

Critic Reviews for Let's Get Tough

There are no critic reviews yet for Let's Get Tough. Keep checking Rotten Tomatoes for updates!

Audience Reviews for Let's Get Tough

There are no featured audience reviews yet. Click the link below to see what others say about Let's Get Tough!