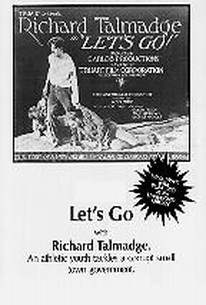 Though he was known more for his stunt-work than his acting, Richard Talmadge gets to show off all his athletic abilities in this action-packed comedy. After dodging the speed cops, Barry Macklin (Talmadge) arrives in his hometown of Hillsboro, where he is supposed to act as negotiator between his father, Andrew Macklin (John Steppling), and the mayor, Ezra Sprowl (Tully Marshall). Meanwhile, he wants to help out Jake Frazer (George Nichols), the kindly town marshal who can't bear to arrest anyone. Barry asks a tramp he has befriended to rob a safe to give Frazer something to do, but the tramp winds up uncovering some evidence of the mayor's wrongdoings. A group of real crooks show up, and Barry leads them on a wild chase that ends when he brings them to Frazer. Frazer is nominated to become the new mayor, while Barry wins his pretty daughter, Lucy (Eileen Percy).

There are no critic reviews yet for Let's Go!. Keep checking Rotten Tomatoes for updates!

There are no featured reviews for Let's Go! at this time.