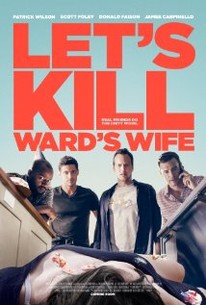 Everyone hates Ward's wife and wants her dead, Ward (Donald Faison) most of all. But when his friends' murderous fantasies turn into an (accidental) reality, they have to deal with a whole new set of problems - like how to dispose of the body and still make their 3 p.m. tee time. Scott Foley's directorial debut, also starring Foley, Patrick Wilson, Amy Acker, and Nicolette Sheridan, is a blackly comic caper about helping a friend out of a bad relationship by any means necessary.(C) Tribeca

Patrick Wilson
as David
View All

Some loose laughs, a bold premise and a particularly amusing turn by the always-welcome Patrick Wilson make this indie trifle more watchable than not.

[A] torturously unfunny exercise, which doesn't even rise to the level of competent misogyny ...

The film is as vacuous and undeserving of regard as any of its characters.

Any pretense of satire collapses by the film's midpoint, leaving only the contempt.

Acting is routine with (Patrick) Wilson the only standout. His deadpan hostility generates most, if not all, of the laughs.

A one-joke effort that wears out its welcome as it struggles to dream up new misunderstandings to organize and macabre antics to choreograph.

Been a couple of days since I've reviewed a film. I've started watching some, but I just haven't been able to finish them. Maybe I should've finished those films before starting this one last night, but I didn't do so, as you can plainly see. Honestly, however, this film didn't really achieve much. There's a good idea here of seemingly normal people finding themselves in a situation where they have to dispose of a body of a person that no one will really miss because of her bullying and unlikable nature. It's not like there's anything great here, as far as concept goes, but there is something here, but the film doesn't really do much to really go as all out with its concept as it possibly could. I'm not saying that Scott Foley is an untalented writer or director, I'm just saying that his ideas might've read better on paper than they did on screen. It just seems like they took the first draft and went ahead and just filmed that. Again, that might read as an insult, but it's just a film that feels empty and shallow in the lead-up to Stacy's death. Hell, it's a movie that ends up feeling empty and shallow even after Stacy's death. The work from the cast is certainly solid enough, particularly from Patrick Wilson, but the character development isn't really that strong. Then again, the film is 80 minutes long and the first 30 minutes of it are dedicated to everything leading up to the eventual death. But there's only minimal stuff done. For example, Scott Foley's character doesn't find his wife sexually desirable, Patrick Wilson's character is trying to get back with his wife, Ward is trying to withstand Stacy's bullying and Ronnie is just like a real-life Quagmire, except not nearly as bad as Quagmire is. That's a lot of story elements to juggle in a film that's only 80 minutes long and that's not even covering the murder and covering it up itself. Not to say that the movie doesn't have some laughs, but there's not nearly enough of them. I did like how Scott Foley's character's relationship with his wife improves their marriage and how they finally start to have sex again. It wasn't funny, but it was something good that the film did, something different. I will say that the film does have a very self-serious tone in its final act. With Ronnie's conscience suddenly acting up. It's a very jarring tonal shift and one that's not to the benefit of the film in the slightest. Essentially Scott and Patrick's character make Ronnie golf club Ward's wife's face until it's unrecognizable, so he's just as guilty as all of them are, even though he already is by fact of actually participating in a cover up. Ronnie is very clearly pissed at his two long-time friends for making him do this, as well he should. I thought this would've been good, because it shows that, even if they didn't face the legal consequences for murdering and then covering up the murder of Ward's wife, that Ronnie's view of two of his best friends would change and that nothing would ever be the same again. That would actually have been really good. But, no, the film had to screw that up. And you wanna know how Ronnie's moral dilemma was solved? Tom, Scott's character, got Ronnie a hot date with an actress Tom interviewed for the magazine he worked for. Yes, really. That's how Ronnie's complex moral dilemma was solved. He got a date. That's, honestly, really bad writing. I have no problem with the characters, literally, getting away with murder, but Ronnie's moral dilemma, which was the central part of the last act, to be resolved as easily as that is really bad writing in my opinion. That's probably the only thing I had a big problem with, even though I didn't think the movie was good. It's not that I disliked it, there's something here, but it's a black comedy that's lacking in edge and style. A black comedy at least needs to be, somewhat, edgy. This movie isn't. Decent performances from the cast, particularly Patrick Wilson, who's always good, don't really make up for the lack of a really strong script and unfocused direction. Like I mentioned, I didn't entirely dislike it, but I wouldn't really recommend it at all.

Written and directed by Scott Foley, Let's Kill Ward's Wife is a quirky horror-comedy. When Ward's bitchy, over domineering wife is killed in a freak accident at a house party his friends conspire to help cover it up. The film's cast is fairly strong, and includes Patrick Wilson, Amy Acker, and Greg Grunberg. However, the dark humor is rather dry and is kind of hit-and-miss. And, the pacing's a little slow, causing the film to drag at times. Still, Let's Kill Ward's Wife is a fun and entertaining oddball comedy that delivers some good laughs.

A deeply unfunny dark comedy that is just a mess!