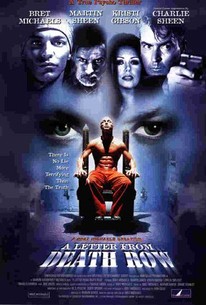 A convicted killer on death row attempts to convince the governor's assistant, who has come to interview him for her upcoming book on prison inmates, that he was framed. Filmed on location in the Tennessee State Prison's Death Row, this psychological thriller offers many intriguing twists and turns, for as the narrative develops, unsettling questions arise. Is the inmate telling the truth or making a desperate bid for his life? The interviewer holds the keys to his fate, but is she really on his side or does she represent the alleged conspirators responsible for his predicament?

Swan Burrus
as Governor of Tennessee

Charlie Sheen
as Cop No. 1

Antonio Lewis Todd
as Cop No. 2

There are no critic reviews yet for Letter from Death Row. Keep checking Rotten Tomatoes for updates!

There are no featured reviews for Letter from Death Row at this time.