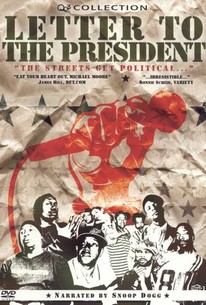 Documentary filmmaker Thomas Gibson directed this investigation into the rise of the Republican right wing in America, and how this has impacted the African-American community. Letter to the President explores the different way in which the policies Reagan and Bush administrations have damaged the lives of black youth, from the government-approved distribution of crack cocaine in inner-city neighborhoods to economic policies that have widened the divide between the rich and the poor. Gibson's film also parallels this phenomenon with the rise of rap and hip-hop music, and how these styles have provided a voice for disenfranchised youth. Letter to the President includes interviews with KRS-One, 50 Cent, Damon Dash, Ghostface Killah, Dick Gregory, Amiri Baraka, and many more; Snoop Dogg narrates.

Critic Reviews for Letter To The President

What's not to love about a movie that features both Larry Flynt making fun of Bill O'Reilly and a professor of humanities quoting Biggie?

There are no featured reviews for Letter To The President at this time.

Letter To The President Quotes