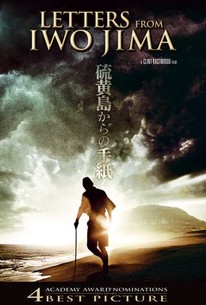 Critics Consensus: A powerfully humanistic portrayal of the perils of war, this companion piece to Flags of our Fathers is potent and thought-provoking, and it demonstrates Clint Eastwood's maturity as a director.

Critics Consensus: A powerfully humanistic portrayal of the perils of war, this companion piece to Flags of our Fathers is potent and thought-provoking, and it demonstrates Clint Eastwood's maturity as a director.

Critic Consensus: A powerfully humanistic portrayal of the perils of war, this companion piece to Flags of our Fathers is potent and thought-provoking, and it demonstrates Clint Eastwood's maturity as a director.

After bringing the story of the American soldiers who fought in the battle of Iwo Jima to the screen in his film Flags of Our Fathers, Clint Eastwood offers an equally thoughtful portrait of the Japanese forces who held the island for 36 days in this military drama. In 1945, World War II was in its last stages, and U.S. forces were planning to take on the Japanese on a small island known as Iwo Jima. While the island was mostly rock and volcanoes, it was of key strategic value and Japan's leaders saw the island as the final opportunity to prevent an Allied invasion. Lt. General Tadamichi Kuribayashi (Ken Watanabe) was put in charge of the forces on Iwo Jima; Kuribayashi had spent time in the United States and was not eager to take on the American army, but he also understood his opponents in a way his superiors did not, and devised an unusual strategy of digging tunnels and deep foxholes that allowed his troops a tactical advantage over the invading soldiers. While Kuribayashi's strategy alienated some older officers, it impressed Baron Nishi (Tsuyoshi Ihara), the son of a wealthy family who had also studied America firsthand as an athlete at the 1932 Olympics. As Kuribayashi and his men dig in for a battle they are not certain they can win -- and most have been told they will not survive -- their story is told both by watching their actions and through the letters they write home to their loved ones, letters that in many cases would not be delivered until long after they were dead. Among the soldiers manning Japan's last line of defense are Saigo (Kazunari Ninomiya), a baker sent to Iwo Jima only days before his wife was to give birth; Shimizu (Ryo Kase), who was sent to Iwo Jima after washing out in the military police; and Lieutenant Ito (Shidou Nakamura), who has embraced the notion of "Death Before Surrender" with particular ferocity. Filmed in Japanese with a primarily Japanese cast, Letters From Iwo Jima was shot in tandem with Flags of Our Fathers, and the two films were released within two months of one another. ~ Mark Deming, Rovi

Akira Kaneda
as Japanese Soldier No. 1

Shoji Hattori
as Japanese Soldier No. 2

Mitsuyuki Oishi
as Japanese Soldier No. 4

Ryan Kelley
as Marine No. 2

Jonathan Oliver Sessler
as Marine No. 3

Michael Lawson
as Marine No. 4

Taishi Mizuno
as Cave Soldier No. 1

Daisuke Tsuji
as Cave Soldier No. 2

Yoshi Ando
as Excavator No. 1

Yutaka Takeuchi
as Excavator No. 2

Hallock Beals
as Marine at Clearing

Ryan Carnes
as Marine at Clearing

Skip Evans
as Pilot No. 1

Wanliss E. Armstrong
as Pilot No. 2
View All

Instead of showing us the differences between the three men, Eastwood chooses to illustrate how much they were alike and, more importantly, how much they resemble you and me.

The whole is a more satisfactory entity than Flags of Our Fathers - and the final scene, which has veterans and relatives scouring the tunnels and caves for the buried letters, is a suitably moving coda.

Eastwood and his cinematographer Tom Stern have done a superb and possibly unique job in showing both sides of this dreadful battle, and the pair of films together already look monumental.

Eastwood has made one of the most quietly devastating war movies of our time.

High-minded and generous, but lacking in real passion and flair.

The moral is hardly original. The scale certainly is. Only a director of Eastwood's standing could possibly terrify enough producers into financing this decidedly foreign, but impressively chunky, white elephant.

One must give Eastwood a good deal of credit ... To make a film about the suffering "your" soldiers endure is one thing, to make one about the horrors inflicted on the "enemy" is something else again.

Infinitely more compelling than its predecessor, yet equally lengthy and ill-paced.

A subdued masterpiece with a unique perspective on war.

In coming to understand the point of view of the opposing side, Eastwood has crafted two masterful and distinct films who are still inexorably intertwined that speak to the simple humanity in all of us.

You realize how very young many of these men were, and how ill-suited to be turned into killing machines.

Modern-day echoes of being snookered into a bad war aren't lost on Clint Eastwood, and "Letters from Iwo Jima" delivers an overwhelmingly powerful eulogy for the death of righteousness in combat on either side of the line.

The story centres on Saigo, a young baker who is conscripted into defending the island of Iwo Jima as the last line of defence against the advancing American forces. The Japanese "forces" are shown as a dishevelled, barely equipped and starving rag tag collection of survivors huddled in underground caves, overwhelmed by the collective might of the US navy and suffering at the hands of fanatical commanding officers who are all too willing to commit "honourable" suicide. In a brave move, Clint Eastwood chooses to show the invasion of Japan from their perspective and not only that but actually uses Japanese actors speaking in Japanese; the entire film is subtitled which I'm sure went down a treat in Hicksville, USA. This is a very human war story, centering far more on the beautifully written and totally believable characters than individual politics. It's a wonderfully understated film, the performances first rate, the cinematography a stunning blend of documentary and artful visuals and it's accompanied by a haunting but subtle soundtrack. It's a million miles from the button pushing contrivances of most war films; probably because it was made by a member of the "enemy" nation and that's what makes it work so well as a very personal story. Saigo is shown as just another human being, just as the American troops are; some are murderous and selfish, others kind-hearted humanitarians. Which side they were on is irrelevant. But the main thought it raised with me was this; if this was the best "resistance" the Japanese had to offer, it seriously calls into question the strategic value of Hiroshima and Nagasaki.

For a movie that has had an amazing word of mouth, "Letters from Iwo Jima" surprisingly is not quite the punch that I'd thought it would be. That isn't to say, "Letters" was a bad movie -- just thought the film did very little to distinguish itself from the rest of the movies within the war genre. Compared to your average war-movie, "Letters" has a bit more depth to it. Yes, visually, you're not gonna find much difference contrary to watching "Saving Private Ryan". The color palette, the shaky-cam, death and blood between quick-cuts, and dirt flinging up from ricocheting bullets are all done via "Saving Private Ryan"'s style except with a considerably lacking production value. Thus, the film seems to be another emulation of the visually and the viscerally spectacular, "Saving Private Ryan". But what "Letters from Iwo Jima" does differently compared to ANY war movie (from what I've seen) is the depiction of themes and struggles that have scarcely been covered in any type of American storytelling. This scarcity, much like how scarcely an American studio would humanize and show the perspective of America's opposing forces during WWII, is present because these themes and struggles are direct challenges of Japanese culture. Like a boss, Eastwood doesn't just leave these heavy themes on the eastern side of the world; he challenges both American and Japanese cultures, almost as if he speaks out to bring both parties at a healthy medium. The heavy and emotional narrative alone, gives "Letters from Iwo Jima" a distinctive identity of its own. The narrative does come heavy-handed though. Many movies that delve into traumatizing events like "The Pianist" or "The Pursuit of Happyness" always seem to fall into the same storytelling detriments: They focus on repetitively piling more and more saddening events without involving viewers emotionally with any of the characters and without introducing any new developments in the narrative. By the end, it just leaves you feeling numbed and saddened, wondering when the climax hit. "Letters from Iwo Jima" ALMOST falls into the same pit, but luckily, manages to pull out of this path and inject an emotional and immersive storyline that gives enough hope and enough characterization to pull out and see that this isn't a bash-fest of sorrow upon the audience. The film isn't without its share of problems though. Editing can be sloppy, cinematography goes from down-right-gorgeous to muddy, and the direction for certain sequences is lazy. It's a shame because under all this mess lies an emotional core with extravagantly fantastic performances and screenplay that accentuate the multi-layered narrative to flying colors. This is hardly Clint Eastwood's best film, and "Letters", though has dynamic themes and challenges, isn't much more different than your typical war-movie, but this film as a whole, gives a true salute to the people that mustered up courage to put on a soldier's uniform, regardless of whether they were American or Japanese.

Eastwood's sensitive and unique portrait of the defending forces on the island of Iwo Jima during the American attack there of WWll. Its especially notable for the time taken to draw out the likable humanity of the particular personalities showcased. A very compassionate take on the fruits of conflict from a surprising source.

Uh oh. I don't think I dug this nearly as much as everyone else. Clint went to great lengths to humanize the Japanese soldiers - almost to the point of neglecting to show the scale and ferocity of the actual conflict. Tell you what, I'm gonna go watch the companion piece Flags of Our Fathers and see it that changes things for me.