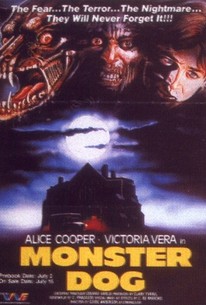 Alice Cooper plays a pop star who takes his band to his hometown to shoot his latest video. They are greeted by the sheriff (whom he's known since a kid) that warn him that there's been several murders in the area where the bodies were ripped to shreds. The police think it's a pack of wild dogs, but Alice knows differnt.

Claudio Fragasso's Monster Dog will most likely fail to tickle the fancies of those seeking laughs from the unintentional comedy promised by its director's reputation.

There are no featured audience reviews yet. Click the link below to see what others say about Leviatán (Monster Dog) (The Bite)!