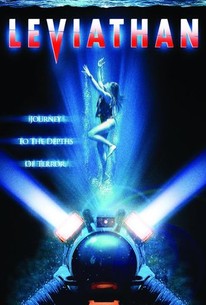 Critics Consensus: A deep-sea thriller with an unusually strong cast and potent ideas, Leviathan quickly plunges into an abyss of weak thrills and lame kills.

Critic Consensus: A deep-sea thriller with an unusually strong cast and potent ideas, Leviathan quickly plunges into an abyss of weak thrills and lame kills.

The latter half of the film is one long feeding frenzy, guided by a familiar horror-film principle: survival of the best-looking.

Leviathan is intermittently interesting, but it's a bad sign that the movie starts losing its punch when the monster shows up.

As far as rip-offs go, this is one of the best.

The cast is like the first team at the B-movie all-star game.

The combination of well thought out characters and an incredible cast to bring them all to life is a huge reason why Leviathan will always be one of my personal favorite underwater monster movies.

Pulled off with a fine cast and a taut storytelling sensibility from director George P. Cosmatos, the film is worth a revisit or a first-time look, whichever the case may be.

There are some slow spots, and because it so closely mirrors a horror classic, there's not a lot of originality or surprise.

It's almost impossible to discuss Leviathan without making a reference (or three) to James Cameron's far, far superior Aliens...

Cheesy hybrid of Alien, The Thing, and The Abyss.

Forgettable and predictable, but with a good cast and some fun special effects.

A cheesy The Thing/Alien knock-off that...actually turned out to be a lot better than it probably had any right to be. Yeah the ending was a load of bull, but this is a surprisingly effective creature feature for the most part. The special effects and set designs are high-quality, plus Peter Weller and Ernie Hudson really shine.

So back in 89 there was a spate of deep sea movies which included James Cameron's 'The Abyss', that movie was the only one to actually do well. I guess its a little ironic that the only other deep sea flick that was of any worth at this time was this movie which just happened to completely and utterly rip off Cameron's previous two mega hits of the era. So the plot here is basically 'Alien' combined with 'Aliens' and 'The Abyss' along with various other horror movies such as 'The Thing'. A small team of undersea miners are on the ocean floor erm...mining stuff, when along the line one crew member discovers a sunken Russian vessel which contains a deadly secret. This turns out to be a mutagen of some kind that infects a crew member killing him, his body then begins to mutate into a sea creature and I'm sure you can guess how this goes. The general idea is not completely identical to the James Cameron 80's filmography, the creature is basically a toxic mutant which is made up of the various dead crew members. This thing absorbs its victims intellect and is physically formed by the crew members bodies...or something like that. The crew members don't appear to be completely dead, more like trapped within this creatures body or they are being slowly absorbed/digested (?). Anyhow the visual design is not entirely shown in the movie, its kept out of sight and hidden behind lots of steel pipes, but what you do see revolves around tentacles (as usual) and snapping maws. The look of of the beast and the way it mutates does run along similar lines to John Carpenter's 'The Thing' where as everything else is 'Alien' within the set of 'The Abyss'. Put it this way the special effects are a solid example of old fashioned hands-on craftsmanship with plenty of blood gore goo and body shock horror, the good old days. Despite the fact Stan Winston, Alec Gillis and Tom Woodruff Jr. worked on the effects they aren't the best you will see, like I say they are solid and fun for fanboys of the craft but the other movies of the day were better examples. I think the creature is mostly hidden because they knew it wasn't too good, earlier in the film the smaller leech type things were effective but the main creature is a bit of a lifeless lump. The deep sea base set does actually look pretty good with some obviously solid production values in play. Again if you think of the Nostromo and the Deep Core combined then you have a good idea of the visuals. Lots of metal corridors, pipes, gratings, the odd beige coloured medical bay, beige living quarters etc...its all too familiar really. I did like the deep sea diving suits they use which have a nice futuristic realistic look, more like space suits admittedly but that tends to be the way with these types of movies. Although not actually filmed under the sea the film does look very good with some brilliant use of indoor sets, heavy mist and lighting, it does look as though its on the ocean floor. This is helped by good camera angles with the crew in their suits when walking around, a great submerged Russian shipwreck and lots of little floating bits in front of the camera to simulate the deep moving ocean. I guess overall this movie is just way too much of a carbon copy of the other movies I've mentioned. The characters are all extremely cliched and look like they've just stepped off the set of the 'Alien' franchise. Richard Crenna would be the Ash/Bishop character, Ernie Hudson is Parker, Daniel Stern would be Brett/Hudson, Eilbacher would be Lambert etc...and yes I did just mention Daniel Stern who was totally miscast incidentally oh and his characters name is Sixpack. Along with that the plot trundles by exactly the same as the Scott/Cameron flicks. I mean Exactly the same right down to the self destruct finale with loud computer countdown, the company knowing all about the mutagen and setting the crew up and ridiculously similar weapons including the obligatory flame thrower. The finale doesn't really help its case either with a brief shark attack that ends just as quickly as its starts, the coastguard flying overhead at the exact moment the survivors surface and the fact the beastie seemingly comes back from its watery grave. Its a bizarre finale really as we see the creature getting crushed and then the entire deep sea base implodes...yet it manages to survive.The movie then still continues as we see Peter Weller getting his own back on the company director or representative by punching her out!! he knocks out a woman! Everything about the finale just feels tacked on and rushed, as though they weren't sure what to do...and it really shows. It is a fun deep sea thriller but its not very scary truth be told and in an era of sci-fi classics this movie fell well short I'm afraid, but its not a total loss.

Leviathan has gotten a reputation of being a rip-off of Alien, thus many critics of this enjoyable B Movie have been unfavourable due to its similarities to Ridley Scott's classic film. Leviathan is an action packed ride that delivers a story very similar to Alien, except it's underwater. The film was directed by George P. Cosmatos who also directed the sequel to Rambo, Rambo: First Blood Part 2. Cosmatos has a good eye of what makes an effective action film, thus he was able to create a fun, and effective Sci Fi action horror film with this film; despite him using Alien as a template for his story. I personally think that Leviathan doesn't deserve all the flack it has received. Despite the fact its derivative from other films, this is still an entertaining film to watch. Stan Winston who created some stellar effects in other films such as Aliens and The Terminator created the effects for this film. However, this time around his effects are less spectacular. Nonetheless, the film is fun, entertaining and in the end a pure popcorn flick from start to finish. Although the film is nothing new, it's still a pleasant film to watch. I think that the film is better than what most critics have claimed it to be. The fact is, it's a clear rip-off of Alien, and because of it, people are quick to dismiss it. However, if you're looking for a mindless monster flick with a familiar formula, then give this film a shot.

In a mining corporation "Tri-Oceanic", the company hires civilians to work under the sea for 90 working days. The man in charge is Steven Beck (Peter Weller), who does his best handling his crew members (Amanda Pays, Ernie Hudson, Hector Elizondo, Michael Carmine, Lisa Eilbacher and Daniel Stern) and the doctor in staff (Richard Crenna). Like any other working day under the sea, two of the crew members has discovers an sinked Russian ship named "Leviathan". When they looked around, one of them has discover an safe. All they found inside is a pictures, a vodka bottle, a video tape and a flask of vodka. Which the crew member found in the safe has taking it without his boss seeing it. When he starts drinking it, along another crew member drinking it secretly. Then they both gets sick, one of them died quietly and the other committed suicide. The doctor, who knows the Russian language well. Along with Beck, they watched the video and they discover the Russian crew are actually scientists and they were playing god. Now these two dead crew members are having generic alteration and slowly turning into the unknown. When the crew tries to get rid of these bodies and putting it out to sea. Parts of the creature got inside the vessel. Now starts killing the crew, one by one. While Beck's boss above the sea (Meg Foster) warms them, they can't escape. Since there's an major storm coming. Now the crew has to do anything to stay alive. Directed by George P. Cosmatos (Rambo:First Blood Part 2, Cobra, Tombstone) made an entertaining, familiar Sci-Fi/Adventure/Horror/Thriller. They were two Science Fictions films about under the sea back in 1989. One was Sean S. Cunningham's cheap looking but horrible "Deep Star Six" and James Cameron's underrated "The Abyss". Since this feature and the two others were major box office disappointments. The premise isn't really nothing new but director Cosmatos has an good cast at work here, the production designs by Rob Cobb (Conan the Barbarian, The Last Starfighter), imaginative creature work by Stan Winston studios, good looking cinematography by Alex Thomson (Alien 3, Death Line, Legend) and fine music score by Jerry Goldsmith (Gremlins 1 & 2, The Omen, Total Recall). "Levithan", it's far from a perfect movie. The screenplay by David Webb Peoples (Blade Runner, Twelve Monkeys, Unforgiven) and Jeb Staurt (Another 48 Hrs, Die Hard, The Fugitive) does have its problems at times but that hardly matters, the picture has a refreshing sense of humor and there's few memorable gory moments of suspense. This film of went on to be a cult favorite. Fans of Science-Fiction/Horror Genre will certainly like this one.