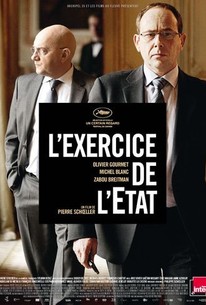 A career politician walks a tightrope between ethics and ambition in this drama from filmmaker Pierre Schoeller. Bertrand Saint-Jean (Oliver Gourmet) is the French Minister of Transportation, a man who entered his career in public service as an idealist intending to use his position to help others and serve the people with honor. Years later, Saint-Jean has come to view politics as a matter of image and gamesmanship, and while he strives to rise above the more corrupt aspects of his profession, he's a man who often looks to how an action will benefit himself rather than the people. As Saint-Jean deals with the day-to-day particulars of his job, he's facing a larger issue -- a campaign to privatize France's train stations is afoot, and while Saint-Jean is convinced it's a bad idea that would have a negative impact for nation's rail system, he also believes who is perceived as the "winner" is just as important as what's the right thing to do. As Saint-Jean wrestles with the privatization issue, he's also reminded that he's neglecting his family as he confers with his assistant (Michel Blanc) and his working-class chauffeur (Sylvain Deble). The Minister (aka L'Exercice de l'Etat) received its world premiere at the 2011 Cannes Film Festival.

Laurent Stocker
as Yan
View All

Saint-Jean may be able to laugh off a woman's rage at the government's ineptitude and apparent cluelessness, but that's not so easy for the rest of us.

Dry as a cabernet sauvignon

There are no featured reviews for L'exercice De L'etat at this time.