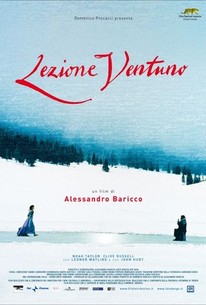 Two men separated by a hundred years share a similar and provocative point of view in this offbeat drama. Mondrian Killroy (John Hurt) is an iconoclastic college professor who has earned a remarkable reputation for his lectures in which he presents scathing re-evaluations of important and acclaimed works of art. Martha (Leonor Watling) is a former student of Killroy who is a passionate admirer of his work, and is involved in a project to recreate on of his most controversial talks -- "Lecture 21," in which Killroy defends in detail his opinion that Beethoven's Ninth Symphony is an old-fashioned piece of claptrap that has not withstood the test of time. Meanwhile, in the 1800's, Hans Peters (Noah Taylor) is a respected musician who is led by fate to Hoffmeister (Clive Russell), a scholar who asks Peters to help him and his compatriots prove their similar contention that Beethoven's final symphony is not the masterwork it's often said to be. Moving back and forth between the 19th and 20th Centuries, Killroy and Hoffmeister offer their own theories about the strengths and weaknesses of one of the world's most celebrated composers, and a number of their friends and acquaintances, some knowledgeable and some wildly eccentric, present their thoughts about the artist and his art. Lezione 21 (aka Lecture 21) was the first directorial project from acclaimed novelist Alessandro Baricco. ~ Mark Deming, Rovi

A brisk, irreverent music-history lesson by way of Terry Gilliam.

There are no featured audience reviews yet. Click the link below to see what others say about Lezione 21 (Lecture 21) (Lesson 21)!