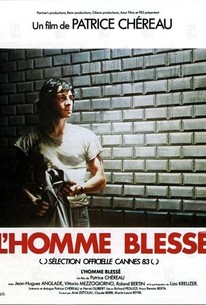 L'Homme Blesse is known in English-speaking countries as The Wounded Man. Jean-Hughes Anglade is a lonely, isolated young man who lets no one get close to him. He meets a street hustler and comes out of his shell, going 180 degrees into gay Obsession. Though he has yet to physically approach the object of his affection, Anglade builds up so much unrequited lust that it explodes with horrible results. L'Homme Blesse isn't rated, but viewership should definitely be confined to those older than 21--and even some of them may not be ready for it.

Hammou Graïa
as Young Man in the Station

Annik Alane
as Mother
View All

A hidden beauty amongst so much ugliness. [Full Review in Spanish]

The story meanders and it really doesn't make a whole lot of sense by the end of the movie.

A bleak and grotty film, turgidly stereotypical in its view of homosexual life - but it's exceptionally well-acted, and consistent in its point of view.

There are no featured reviews for L'homme blessé at this time.