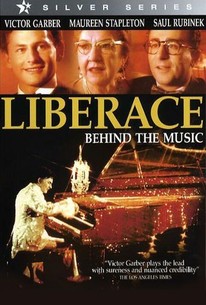 This was the "unofficial" Liberace biopic, as opposed to the error-ridden "official" Liberace (telecast one week earlier in October of 1988). The star of Liberace: Behind the Music is Broadway actor Victor Garber, who later scored a personal triumph as the devilish Mr. Applegate in the revival of Damn Yankees. Behind the Music is an unauthorized TV movie based on the recollections of the pianist's business manager, giving scriptwriter Gavin Lambert far more leeway in delineating the title character, warts and all. The closing sequences delve much deeper into the AIDS question than was possible in the family-approved Liberace starring Andrew Robinson (who, to be fair, looks more like the real entertainer than does Victor Garber). Liberace: Behind the Music could have descended into tabloidism ("Behind the rumors and the secrets" read the advertising copy), but emerges as a work of conspicuous dignity and (reasonably) good taste.

Critic Reviews for Liberace: Behind the Music

There are no critic reviews yet for Liberace: Behind the Music. Keep checking Rotten Tomatoes for updates!

Audience Reviews for Liberace: Behind the Music

Slap-dash garbage. Mediocre acting (albeit with a better than expected Liberace impression of the titular subject). Disjointed, incoherent and just plain bad script. Shockingly few impressive costumes. And the house is one big, anachronistic mish-mash of the Hollywood Hills, Vegas, and Palm Springs houses. Poor makeup and video quality. Unless you knew the Liberace bio before, you won't have any better idea after this mess of a film.

Liberace: Behind the Music Quotes