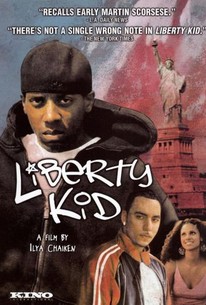 Director Ilya Chaiken explores the lives of Tico and Derrick, two friends and former Statue of Liberty employees who lost their jobs in the aftermath of the September 11, 2001, terrorist attacks on the United States. Tico is a quick-tempered youth who responds to his unemployment dilemma by dabbling in petty street crime and half-baked scams. Meanwhile, Tico's friend Derrick becomes convinced that the only means of providing for his family is to finally give in to the persistent Army recruiters who have been hounding him for months. As the situation begins to get desperate and neither of the pair proves successful at landing a legitimate job, each struggles to make ends meet by any means necessary.

Critical Consensus: Bucket Gets Kicked, The Orphanage is Certified Fresh, In the Name of the King Not Screened

[Director] Chaiken has a keen eye and ear for street-level realism and an evident love of the city's as-yet-ungentrified fringes.

There is no shortage of films about the aftermath of the 9/11 terrorist attacks, but there is a lack of good ones. The low-budget indie Liberty Kid, produced by downtown auteur Larry Fessenden, is one of those that succeeds.

Unanswered questions about Derrick's kids and Spanish-speaking mother abound, and their all-too-infrequent interactions point to a hard-knuckled realism about post-9/11 New York that begs to be seen.

Evident throughout is Chaiken's ability to patiently build a scene without fanfare or artifice.

Even though Liberty Kid is a small film, much of it is deeply poignant; it enhances our compassion for all the ghosts of Sept. 11.

What begins as a run-of-the-mill urban drama about two guys from Brooklyn turns into something more epic and resonant.

almost anthropological in its careful attention to colorful Brooklyn detail

The effects of Derrick's wars -- multiple, low-key, endless -- were in motion long before he went to Afghanistan.

As volatile as the subject matter is here, Liberty Kid is shockingly subtle. Massive aspects about the relationship between Tico and Derrick are only inferred and the performances of the leads are really quite good.

For all its good intentions, Liberty Kid ultimately disappoints.

There are no featured audience reviews yet. Click the link below to see what others say about Liberty Kid!