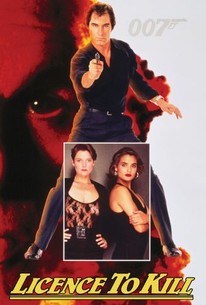 Critics Consensus: License to Kill is darker than many of the other Bond entries, with Timothy Dalton playing the character with intensity, but it still has some solid chases and fight scenes.

Critics Consensus: License to Kill is darker than many of the other Bond entries, with Timothy Dalton playing the character with intensity, but it still has some solid chases and fight scenes.

Critic Consensus: License to Kill is darker than many of the other Bond entries, with Timothy Dalton playing the character with intensity, but it still has some solid chases and fight scenes.

For his second outing as James Bond, Timothy Dalton is working on his own rather than on behalf of the British Secret Service in this follow-up to The Living Daylights). When his American friend Felix Leiter ({$David Hedison), an agent of the Drug Enforcement Administration, is seriously injured by drug dealer Franz Sanchez (Robert Davi), 007 is out for blood. There is precious little time for the usual Bondian quippery and campiness, resulting in a marked increase in bloodletting (including the "implosion" of secondary villain Anthony Zerbe). A climactic highway chase involving an oil tanker and a helicopter is the highlight, as well as Benecio Del Toro in an early role as the psychotic henchman Dario. Licence to Kill's intensified taste for violence lessened Bond's box-office value, and helped keep 007 off the screen for another six years before Pierce Brosnan took up the mantle. ~ Hal Erickson, Rovi

News & Interviews for Licence To Kill

View All Licence To Kill News

Critic Reviews for Licence To Kill

I think it's very underrated.

Every once in a while, [the Bond series] pulls in its stomach, pops the gun from its cummerbund, arches its eyebrow and gets off another bull's-eye. The newest, Licence to Kill, is probably one of the five or six best of Bond.

He may look the part, but Timothy Dalton fails the boots, the scuba gear, or the automobiles left him by Moore and Connery.

If the series is ever going to return to its Connery-era glory, it definitely needs some new writers, ones who know how to streamline a story and keep the dialogue tight.

Dalton revives the cool, ironic detachment of the Connery years, but he also allows a touch of obsession to show through Bond`s surface aplomb.

With Dalton straightening out Bond for the second time, Licence to Kill continues the salvage operation begun in The Living Daylights and rescues a series that was in danger of shooting itself in the foot. With a Walther PPK, of course.

The most brutal Bond film from the pre-Daniel Craig era.

Licence to Kill is a different beast entirely. Violent, barbaric, and untamed - this was everything that James Bond decidedly was not. It was here that Dalton's ideal of Fleming's agent crystallized.

The level of violence is unlike any other of the series, making the chief antagonist more formidable, memorable, and ultimately less fun.

Daniel Craig shows the grit, the determination and vulnerability that Bond has...Dalton did that years before!

It may not be up your alley if you're just into Bond films, but it you're in the mood for an old fashioned action film, you can do far, far worse than sticking this film on.

Lacks a bit of that Bond magic. Perhaps not the cruder, formulaic elements of other Bond films, but the lightness of touch and inherent charm in the character of Bond himself.

Audience Reviews for Licence To Kill

In Timothy Dalton's second and final film as James Bond, we get the best in the series since "For Your Eyes Only" and one of the most unique and interesting entries. This movie is as far from the Bond formula as the Daniel Craig films, but the difference is that audiences apparently weren't ready to give up the cheesy one-liners and bombastic thrills the series had become known for up to this point, leaving this picture with the worst attendance in the series history by a wide margin. It's unfortunate because I feel like audiences would appreciate this film more today, but the toxic word of mouth the movie received upon release has become its legacy. This is a revenge thriller that sees Bond going rogue in order to purse a personal vendetta against a drug lord that seriously injures a friend and kills his friend's wife. Timothy Dalton is better here than he was in The Living Daylight's, and although Bond doesn't have the dashing personality anymore, he has never been more ruthless. It makes the movie a little bit of a downer compared to the rest, but also one of the most driven. It's compelling from beginning to end, despite a few dry spots. The same cannot be said for the last couple of entries. Q's added role in this film is also a pleasure for fans of the series. Overall, it's one of the stronger entries in the series and seems to be a clear influence on the current Bond films.

This is a pretty good Bond film. It's edgy, violent, and the first to be Rated PG-13. Dalton gives a good performance, so it sucks that this was his final of two films in the role. At least he went out on a high note. Not until Daniel Craig came around did the film get as serious as it does here. That's why I like it so much, because Bond gets almost ruthless. Granted, it's still an 80s era film, so the cheese and camp aren't 100% gone, but even then, this film gets dark, and there's an increase in the bloodletting. Bond is on a quest for revenge, and goes off the books in order to get things done. The target is a ruthless drug lord who has seriously maimed Bond's friend American DEA Agent Felix Leiter. Robert Davi is great as the antagonist, and you really believe that he's a chilling and ruthless fellow. Benicio del Toro gets his career off to a start as a henchman, which is cool, and, despite the campiness of it, I do kinda dig seeing Wayne Newton as a huckster type of character. Carey Lowell is the primary Bond Girl, and I like her a lot, She's got this quality about her that I just really like, even if I can't properly articulate why. It's too bad she has basically gone under the radar for the most part since then. All in all, a really fine film.

Timothy Dalton's second turn as Bond would also be his last, and I think that's probably a good thing. He does a decent job as Bond, but really makes the character humorless, and a borderline bore. Her he sets out avenge a friend by going after a Latin Drug dealer. The movie has great action, and look closely for a young Benecio Del Tore as a psychotic henchman(has an awesome death scene by the way). It's a more violent take on Bond than the Moore movies, and that's fine, but just keep the humor and womanizing with it. Also, I didn't care that movie ends with a cheezy love song like "If You Ask me To". Not the worst Bond, but probably towards the bottom of them. Still a must watch for all Bond fans.

Bond is on a mission and this time it`s extremely personal. An exhilarating and spectacular action-packed thrill-ride that's filled with some pulse-pounding chases and sensational action scenes. Timothy Dalton strikes gold again with Bond, giving him the right amount of charm and edge to make the character ad story work well. One of my favorite Bond films. A taunt and gripping thrill to watch. It digs deep into some nice character stuff leading back to On her Majesty s secret service. A fun and explosive adventure that you will love to watch again