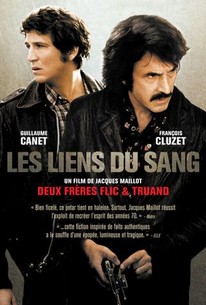 Jacques Maillot's psychological drama Les Liens du sang observes the tense and fragile days following a difficult reunion between two very different siblings. François (Guillaume Canet) is a police inspector who spent years forcibly estranged from his issue-laden brother Gabriel (François Cluzet), after a judge sentenced the latter to a decade in prison for murder. Gabriel's sudden release from prison ends the separation, and the men both instinctively make attempts to bury the past and help Gabriel reassimilate after years off the street. Their efforts prove feeble and ineffectual, however, as the past comes encroaching back and begins to plague both men.

Laurent Besançon
as Touati
View All

The setting is a Paris packed with tight leather jackets, big hair and foxy girls, and the action, sex and family drama make for an enjoyable ride. Unfortunately, the denouement is frustratingly abrupt.

This frisky if long-winded and derivative French policier never gets off the starting-blocks despite some charismatic performances and intriguingly executed set-pieces.

This being the gritty 1970s, the subtitled dialogue is as hard as nails. The Cain and Abel rivalry unfolds like a dismal episode of Minder.

The result is an enjoyably rich, gamey stew of crime and family betrayal - and there's an interesting mention of 70s French super-crim Jacques Mesrine, the subject of a new biopic starring Vincent Cassel.

Jacques Maillot's enjoyably retro crime drama, which fits itself out with enough period bangers and bad moustaches for an entire Jean-Pierre Melville retrospective.

It is not so much a wig, more a man-eating bird's nest. And not just an actor becomes lost beneath it but an entire film.

Why remake a decade?

Although it draws on a real-life memoir, this Gallic crime drama never really gets going. There's potential in the tension between a wavering ex-con and his cop sibling, but the actors seem to have been cast the wrong way round.

Hopefully, with this polished policier Maillot will get the small screen funding to expand this story and tie up some of the intriguing loose ends.

Atmospheric, noirish French cop thriller with strong performances from its two leads, though it's slightly let down by a disappointing climax.

Gritty and tough, this period thriller about brothers on opposite sides of the law has remarkably complex characters and a vivid sense of style. Despite a choppy approach, it really grapples with some strong moral dilemmas.

Rich Cline
Shadows on the Wall
View All Critic Reviews (13)

Good movie. Les Liens du sang is a French crime drama set in the 70's about two brothers one a cop, the other an ex-con just released from prison after doing ten years for murder. I loved the stylish direction and the authentic camera work. The acting was top drawer throughout the cast, and the story was always interesting, with nice use of sub-plots. However I wasn't too satisfied with the ending, as it left me a bit empty.