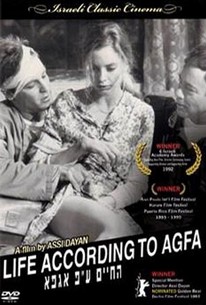 In general, one could say that Tel Aviv is where worldly Israelis go to play, and Jerusalem is where religious ones go to pray. In this tragic drama, the characters are all denizens of Tel Aviv's nightlife, and the action centers around an all-night bar owned by two women with difficult romantic relationships. The first owner is Dalia (Gila Almagor), who is the mistress of a film producer in ill health. The second owner is Leora (Irit Frank), whose policeman boyfriend Benny (Shuli Rand) can't stop tomcatting around. The bar is currently populated by the owners, some well-lubricated soldiers, Leora's boyfriend Frank, Riki (a mentally fragile woman who is "under doctor's orders" never to allow herself to be alone), a singer, some drug dealers, and the Arabs who work in the kitchen. Benny plays the hero at first by rescuing Riki (Avital Dicker) from the soldiers, but then he seduces her, with tragic results. More tragedy follows, as the crows of truth come home to roost.

Critic Reviews for Life According to Afga

There are no featured reviews for Life According to Afga at this time.

Life According to Afga Quotes