The Life and Death of Colonel Blimp1943 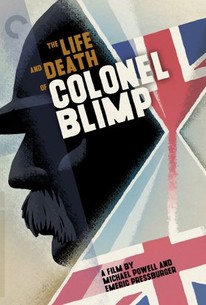 Critics Consensus: A moving evocation of both British values and the passage of time, The Life and Death of Colonel Blimp is an epic portrait of a singular character by Powell and Pressburger.

Critics Consensus: A moving evocation of both British values and the passage of time, The Life and Death of Colonel Blimp is an epic portrait of a singular character by Powell and Pressburger.

Critic Consensus: A moving evocation of both British values and the passage of time, The Life and Death of Colonel Blimp is an epic portrait of a singular character by Powell and Pressburger.

The Life and Death of Colonel Blimp Photos

Michael Powell and Emeric Pressburger's much-lauded epic Life and Death of Colonel Blimp, which satirizes British traditionalism, stirred up impassioned hostilities and indignations among the Brits when released in 1943. It so infuriated Winston Churchill, in fact, that he refused to allow its exportation to other countries, particularly the U.S. When Blimp finally did premiere in the States in 1945, it screened in a drastically cut version. The sweeping story covers several decades. It begins at the tail end of the Boer War, when handsome young British officer Clive Candy, recently back from the battlefront, is infuriated by his discovery that Deutschland papers have played up the British atrocities in South Africa, propagandistically. He grows so irate, in fact, that he travels to Germany to address the problem. Once there, he meets an attractive British educator, Edith Hunter (Deborah Kerr) who spends her days teaching English as a second language to German students. They grow close, but Candy so aggravates the local indigenes that he winds up in a duel with a German officer, Theo Kretschmar-Schuldorff (Anton Walbrook). The men wound each other and are sent to the same hospital, where they become friends. Candy - who doesn't yet realize he's fallen in love with Edith -- senses that Theo and Edith are attracted to one another, and encourages the couple's marital union. Candy subsequently returns to England, then falls for and marries Barbara (again played by Kerr), a nurse who bears a strong resemblance to Edith. She later dies, but Candy meets a third woman during WWII, Johnny (Kerr a third time), assigned to drive him from one locale to another during his campaigns. Meanwhile, Theo - disgusted by Nazi atrocities -- absconds to England, where he reencounters his old friend, now a prattering old shuffler rapidly approaching the end of his career and raving continuously about Nazi conduct (or lack thereof) in battle. Powell and Pressberger adapted Colonel Blimp from a comic strip; it became one of the hallmarks of their careers. ~ Sidney Jenkins, Rovi

A.E. Matthews
as President of Tribunal

Captain W. Barrett
as The Texan

John Boxer
as Soldier
View All

News & Interviews for The Life and Death of Colonel Blimp

View All The Life and Death of Colonel Blimp News

Critic Reviews for The Life and Death of Colonel Blimp

This glorious film is about the greatest mystery of all: how old people were once young, and how young people are in the process of becoming old.

A wonderful salute to British decency and a touching portrait of a friendship that bridges national boundaries.

Maybe the most wonderfully British movie ever made.

A 1943 Michael Powell and Emeric Pressburger collaboration so unambiguously satirizing the military mind-set that Prime Minister Winston Churchill tried to have it banned.

Few British films from this period seem to mythologize the pre-war period of Churchill's youth and early career quite as potently.

There is nothing brilliant about the picture, but it is perceptive, witty, and sweet-tempered, and it shows a continuous feeling for the charm and illuminating power of mannerism, speech, and gesture used semi-ritually, rather than purely realistically.

Colonel Blimp manages to be both leisurely and exciting. It is definitely worth seeing.

[A] profound and moving meditation on friendship and honour, patriotism and growing old.

The Life and Death of Colonel Blimp remains a monumental feature, ripe with still relevant themes and classic Technicolor beauty.

It's a heartbreaking study of aging and obsolescence in the face of modernity, but also a paean to a generation of heroes.

says something wonderful about who we are when we're at our best.

Audience Reviews for The Life and Death of Colonel Blimp

The magic of the Powell & Pressburger directing and producing team has never been more prevalent or as affecting as it was than with their World War II character study epic The Life and Death of Colonel Blimp. Heralded as one of, if not THE greatest British film ever made, its power lies soley in its performances and its dialogue. People that see it as nothing more than a pro-war statement seem to miss the point completely. To me, it's about what Colonel Candy goes through at the end of the film: not understanding what to do, even if you think you know you do. That sums up the film's overall message to me. If it were a pro-war statement, then he'd know exactly what to do. That's a sort of simple-minded view, but it's one I picked up on early on. Roger Livesey, Anton Walbrook and Deborah Kerr are magic, and their performances still have the power to affect. A colossally-well made piece of cinema.

This film is an interesting look at young people looking at old people...what you see is a paunchy old guy with a moustache, but as the old guy says, "You don't know anything about me," and of course the movie endeavors then to tell us all about the old guy. It was a little humbling to realize that we are the last generation alive who heard first hand accounts from the turn-of-the century crowd and when we die it goes with us. But this movie is a marvelous film archive of what it was like then.

How amazing is Anton Walbrook? He steals almost every scene he's in.

The Life and Death of Colonel Blimp Quotes