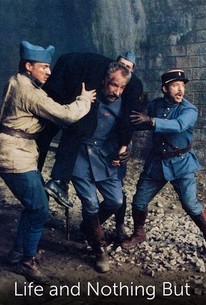 La Vie et Rien d'Autre (Life and Nothing But) Photos

The grim post-World War I era in Europe is grist for director Bertrand Tavernier's mill in Life and Nothing But. Philipe Noiret portrays a French major who is supervising the gruesome task of counting and identifying the corpses still strewn over the battlefield. Noiret is obsessed with the notion that, by doing his job above and beyond the call of duty, he can somehow make up for the carnage in which he participated a few years earlier. The major's mission is intercut with short vignettes involving the families and loved ones of the dead, and with the efforts by another officer to find a suitable candidate for an Unknown Soldier testimonial.

Arlette Gilbert
as Valentine
View All

A remarkable film about post World War I France

A masterfully directed film, exquistely acted by Azéma and Vidal.

There are no featured audience reviews yet. Click the link below to see what others say about La Vie et Rien d'Autre (Life and Nothing But)!

La Vie et Rien d'Autre (Life and Nothing But) Quotes