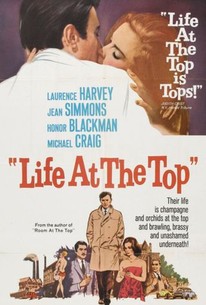 Life at the Top Photos

Life at the Top is a belated sequel to Room at the Top, John Blaine's "angry young man" British novel that was made into a film in 1959. Laurence Harvey is back as Joe Lampton, the man-on-the-rise protagonist who in Room had given up true love in favor of a career-boosting (and antiseptic) marriage to his boss' daughter. Ten years have passed: Lampton is a business success, but utterly bored by his dead-end marital setup. His wife feels the same, and it isn't long before Mr. and Mrs. Lampton begin conducting separate affairs. While the original Room was a fairly accurate evocation of its era, Life at the Top works too hard and too noisily to be "mod," in reflection of the ethereal Swinging London era. The inclusion of flashbacks from Room at the Top, in which Harvey is seen making love to Simone Signoret, only serves to emphasize the shortcomings of the sequel. The best moments in the later version can be found in the early establishing scenes set in Yorkshire. Life at the Top was followed by a TV series called Man at the Top, starring Kenneth Haigh as Lampton, which in turn was followed by a theatrical feature of the same name. ~ Hal Erickson, Rovi

George A. Cooper
as Graffham

David McKail
as Oscar
View All

Critic Reviews for Life at the Top

A lacklustre sequel to Room at the Top.

This picture could be a documentary of all the ugly, tawdry, complicating things that might happen to restless married people when they found themselves helplessly caught in the stuffy social surroundings of the industrial Establishment.

An il-advised sequel to the energetic Room at the Top.

Life At The Top is not a very likable film, partly because the treatment is heavy-handed, and partly because Joe's self-disgust turns everything sour...

Life at the Top emerges as stronger stuff than the average sequel.

There are no featured reviews for Life at the Top at this time.

Life at the Top Quotes