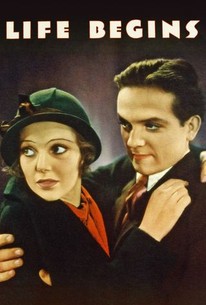 Life Begins is an episodic Warner Bros. programmer about one unusually busy night in a maternity ward. Loretta Young is the central character, a convicted murderess who has been impregnated by her gangster boyfriend. She is moved to the hospital to give birth, sharing ward space with hard-boiled Glenda Farrell, who's willing to sell her unborn child, and several other mothers-to-be from various walks of life. Under the benign supervision of head nurse Aline MacMahon, most of the babies are born safely, though the repentant Young dies in the process. Based on a play by Mary McDougal Axelson, Life Begins was remade as A Child Is Born (1940), which was not nearly as effective (or as frank) as the original. ~ Hal Erickson, Rovi

Terrance Ray
as Student
View All

It has human interest plus and has something definite to say to every man and woman who sees it.

There are no featured reviews for Life Begins at this time.