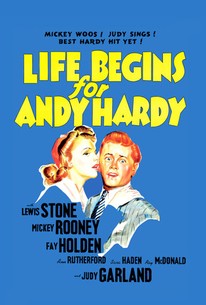 Eleventh Andy Hardy outing, in which Judge Hardy's son gets a job in New York City prior to starting college, and learns some tough lessons about the grown-up world. Judy Garland's third and last appearance in the series. (Some knucklehead at MGM decided to cut her songs from the film.)

...a little Hardy noir: a homeless kid that Andy hides in his boarding house room dies, an apparent suicide in the wake of shattered dreams. This is a real education for Andy...

There are no featured audience reviews yet. Click the link below to see what others say about Life Begins for Andy Hardy!