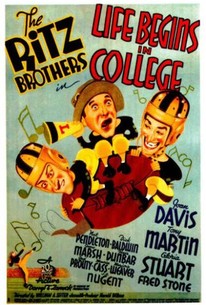 The Ritz Brothers play three goofballs working their way through college by putting in time at a tailor shop. The college football team's star player is Nat Pendleton, a wealthy Native American who has donated a large amount of money to the school. As long as Pendleton is able to play, the football coach (Fred Stone) feels safe in putting the Ritz boys in the game at the last minute, when their zany antics can't possibly effect the final score. In Jim Thorpe fashion, the Indian student is disqualified when it is learned he once played professionally. Thus the coach is forced to utilize an untried player(Dick Baldwin) in the Big Game--and when that player is injured, it's the Ritz Brothers to the rescue. Life Begins in College gives plenty of attention to the comedy of the Ritz Brothers, if that's your idea of a good time.

There are no featured reviews for Life Begins in College at this time.