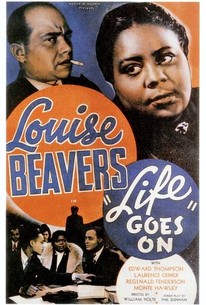 Starring in what the trade-papers would term her "first all-Negro picture," the always delightful Louise Beavers played the widowed mother of two very different sons. Henry (Reginald Fenderson, a wastrel who gets in trouble with underworld characters, and Bob (Edward Thompson, a studious young man who earns a law degree. When Henry finds himself falsely accused of a gang-related murder, Ma persuades brother Bob to defend him in court. Produced by the white-owned Million Dollar Productions, Life Goes On was directed by former cinematographer William L. Nolte, a Caucasian.

Critic Reviews for Life Goes On

The story is hackneyed and aged in its telling of the mother who bring up two sons, one good and one bad, but it has been agreeably worked out.

We find pleasure in expressing our one-hundred percent approval of Life Goes On.

There are no featured reviews for Life Goes On at this time.