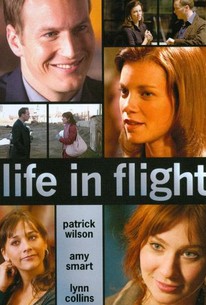 A successful New York architect (Patrick Wilson) with a beautiful wife (Amy Smart) and an adoring young son is forced to reevaluate his outwardly idyllic life after a chance meeting with an urban designer (Lynn Collins) reveals the cracks in the foundation of his paradise in an existential drama from first-time feature filmmaker Tracey Hecht.

Patrick Wilson
as Will

Critic Reviews for Life in Flight

At just over 70 minutes, it's a small movie that still fails to properly fill its running time thanks to one-note lead characters, underdeveloped supporting players and overly simplistic storytelling.

Audience Reviews for Life in Flight

The film was so so. Patrick Wilson and Lynn Collins shine in the film. I was surprised at how short the film was. The film reminded me of a movie that Ed Burns would have made. However, if Ed would have made this movie, he would have done a better job with it. The ending was a little disappointing since I was expecting it to be different.