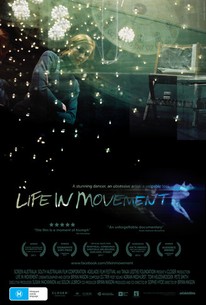 In 2007 the Sydney Dance Company appointed 29-year-old choreographer Tanja Liedtke as their first new artistic director in 30 years. However before she could take up the position, she was struck and killed by a truck in the middle of the night. Admired internationally as a dancer and celebrated for her fresh choreographic voice, she was known as a dedicated artist, intelligent, dorky, funny and generous. 18 months after her death her collaborators embark on a world tour of her work, and in the process they must deal with their grief and explore the reasons for her death. Interspersed with intimate footage of her artistic process and previously unseen interviews, Life in Movement is a film about moving creatively through life and loss. Filmmakers Bryan Mason and Sophie Hyde give us a powerfully rendered take on art and artists, creativity and our own mortality.

Critic Reviews for Life In Movement

In every sense, it's a moving story.

Wim Wenders's Pina, about the late Pina Bausch, has set the bar high. This one is worth treasuring, in the same canon.

Though much of the film's context is ensconced in the dance industry, Life in Movement is a powerfully rendered tale of young creatives finding their place in the world.

Deftly compiled and packed with revealing footage, this is a beautiful tribute to its subject, and also an eye-opening look into the emotional power of art.

A heartfelt and valuable work that documents a remarkable young woman, who would have given us all such a fantastic body of dance work over the years

What this documentary about 29 year old dancer and choreographer Tanja Liedtke achieves brilliantly, is the depiction of the way the artist becomes locked inside her work and creativity

What this documentary about 29 year old dancer and choreographer Tanja Liedtke achieves brilliantly, is the depiction of the way the artist becomes locked inside her work and creativity

A haunting portrait of a brilliant, troubled artist.

There are no featured reviews for Life In Movement at this time.