Life Is Hot in Cracktown2009 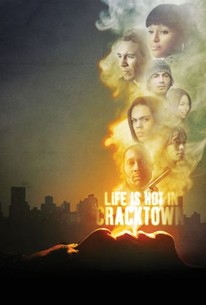 Life Is Hot in Cracktown Photos

Based on writer/director Buddy Giovinazzo's novel of the same name, Life Is Hot in Cracktown explores how crack cocaine infiltrated the streets of urban America by following the journeys of four people whose lives are on a tragic collision course. Pre-op transsexual Marybeth (Kerry Washington) is working as a prostitute in order to save enough money to make her transformation complete. She lives with her lover, Benny, a small-time burglar, whom she hopes to marry after her final operation. Meanwhile, Manny (Victor Rasuk) is busy pulling double shifts while his wife, Concetta (Shannyn Sossamon), cares for their sickly infant son in their run-down apartment. By night Manny works at a 24-hour bodega frequented by junkies, drug dealers, and prostitutes, and by day keeps the peace as a security guard at a welfare hotel. One of the residents at that hotel is Willy, a ten-year-old boy who lives with his mother (Illeana Douglas) and her abusive boyfriend. Willy begs for money on the street so he and Susie can get some fast food. But it's dangerous out there, because volatile gangster Romeo (Evan Ross) is still searching the streets for his brother's killer, and he won't hesitate to terrorize anyone unfortunate enough to cross his warpath. Lara Flynn Boyle, Brandon Routh, Desmond Harrington, and RZA co-star.

Richard Portnow
as Guy From 4K

Luke LaFontaine
as The Beret

Pierson Blaetz
as Customer
View All

Critic Reviews for Life Is Hot in Cracktown

While Giovinazzo's crude approach undercuts his occasional stab at gravitas, Cracktown's cast keeps things in the ballpark of relatable humanity.

One part Crash and one part Menace II Society.

There are no positive characters in Cracktown. No voice of reason; just the reality of dire circumstances, which cannot be tied up in a pretty Hollywood bow.

Aside from tremendous performances given by Washington and Rasuk, the bleakness in 'Cracktown' doesn't offer a solution that leaves a positive outlook on life.

About as credible as a middle school production of Death of a Salesman. The unspectacular storylines plod along, dragged down by lackluster performances and sloppy direction.

Life goes far past the boiling point for most of the characters in this hilariously overwrought ghetto soap opera from cult writer-director Buddy Giovinazzo.

Audience Reviews for Life Is Hot in Cracktown

This is garbage. There's no reason to follow the lives of a single character involved, they're all one-dimensional losers. The writer doesn't convey anything more than an outsider's glimpse into the subject matter. This movie relies on nothing more than shock value, and it's about as subtle as a sledgehammer. All that's on display is a bunch of idiots abusing themselves, children, women, and the elderly. This is void of any artistic value, avoid.

The great Buddy Giovinazzo returns after a painfully long hiatus with this fantastically titled masterpiece. It's as if Abel Ferrara and Robert Altman joined forces, only with that nihilistic Buddy touch. Each separate story is compelling with great performances all around (I especially like that Desmond Harrington kid. Great actor). The audience really cares about most of the characters, and knowing Buddy is writing their stories, truly fears for their safety. Highly recommended for those who love gritty, depressing and downbeat stories.

Life Is Hot in Cracktown Quotes