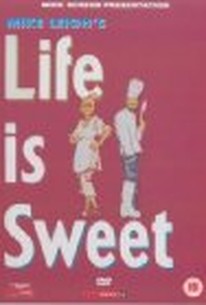 Mike Leigh's situation comedy about a lower middle-class family in the London suburbs is a slice-of-life chronicle that subtly reveals the pain and rage underneath the surface of day-to-day conventions. The youngish parents, Wendy (Alison Steadman) and Andy (Jim Broadbent) live with their 20-something twin daughters, Nicola (Jane Horrocks) and Natalie (Claire Skinner). Natalie, a plumber's assistant, is clean-cut and forever looks on the bright side of life. Nicola, who is unemployed, has nothing but contempt for conventionality. As the daughters deal with the obsessively sunny Wendy and the lackadaisical Andy, and confront a succession of ne'er-do-well friends and neighbors, a darker picture is painted of this normal family -- particularly Nicola, who is convinced she is fat and ugly (despite her emaciated appearance), with Natalie being a constant rebuke to her. ~ Paul Brenner, Rovi

Harriet Thorpe
as Customer
View All

Critic Reviews for Life Is Sweet

Most movies begin by knowing everything about their characters. Life is Sweet seems to make discoveries as it goes along; it really feels as if the story is as surprising to the characters as it is to us.

By allowing the performances to be so demonstrative, it betrays Leigh's central desire to hammer home the sole conceit or piece of subtext he wants to bring to Life if Sweet.

Leigh's film celebrates the resiliency of commonplace people, which is all very nice though quite at odds with the portrait of a faltering England.

The director's wife at the time, Alison Steadman, stealing the show as Wendy the nurturing suburban housewife survivor.

Explores the personal and economic lives of a lower middle-class English family in hard times.

Audience Reviews for Life Is Sweet

A portrait of Enfield chavdom in 1990. Crazy, ugly, genius.

Yuck! What a disappointment in going back to see classic Mike Leigh. What a way he has come since then and thank God. This was not particularly memorable. For Leigh completists only.

This is a great movie. Jane Horrocks is excellent in it. Funny while being sad at the same time. Must watch it again sometime.