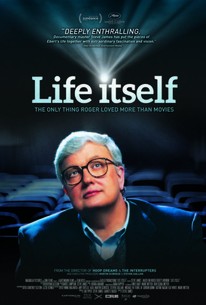 Critics Consensus: Rich in detail and warmly affectionate, Life Itself offers a joyful yet poignant tribute to a critical cinematic legacy.

Critics Consensus: Rich in detail and warmly affectionate, Life Itself offers a joyful yet poignant tribute to a critical cinematic legacy.

Critic Consensus: Rich in detail and warmly affectionate, Life Itself offers a joyful yet poignant tribute to a critical cinematic legacy.

Acclaimed director Steve James (Hoop Dreams) and executive producers Martin Scorsese (The Departed) and Steven Zaillian (Moneyball) present LIFE ITSELF, a documentary film that recounts the inspiring and entertaining life of world-renowned film critic and social commentator Roger Ebert - a story that is by turns personal, funny, painful, and transcendent. Based on his bestselling memoir of the same name, LIFE ITSELF, explores the legacy of Roger Ebert's life, from his Pulitzer Prize-winning film criticism at the Chicago Sun-Times to becoming one of the most influential cultural voices in America. (C) Magnolia

News & Interviews for Life Itself

View All Life Itself News

Critic Reviews for Life Itself

No film in the festival is as critic-friendly; watching it, I finally understood how football players must feel about 'Brian's Song'.

This is a sometimes painful but always inspiring tribute to one of the great members of our profession.

Movies help us think about who we are and how we live together. And as a movie, Life Itself is a heartfelt, clear-eyed tribute to a master.

With Ebert's blessing and encouragement, Life Itself is a warts-and-all look at how the son of an Illinois electrician and housewife became a prolific writer who spent 46 years as the film critic at the Chicago Sun Times.

What comes through most in Life Itself, a film named after Ebert's 2011 memoir, is his great, open-minded vigor.

If you aren't moved by Life Itself, you ought to have your heart examined.

Never shies away from the difficult parts of the story. Moments of frustration and pain are included but ultimately the doc is a wake for the late film critic. Stories are shared, secrets are told and a life is celebrated.

Life Itself is a reminder, I suppose, that when the human spirit lives on we never really lose our voice.

A heartfelt exploration of a man who opened film up for the world.

Life Itself is not a film of mourning, it is a film of celebration. It is not a lionization, it is an exploration. But most importantly I think it is a film that Roger would be proud of.

I loved this movie... partly because I loved Roger.

Audience Reviews for Life Itself

A beautiful tribute to a brilliant writer and inspiring man who was one of the most influential movie critics of all time, showing us his indisputable importance for the Seventh Art, his genius and flaws, and his touching fight with cancer, all in a very honest, unsentimental way.

A wonderfully poignant documentary in which Ebert's deep love for family, life, and the movies is illuminated through the screen. The movie critic icon would not have wanted his story told any other way.

One of the major things that I was worried about, when seeing this documentary, was whether the director would be able to show the distinct and complex life of Roger Ebert. There were many stages in the evolutions in his life: from experienced newspaperman, to loving husband, to cancer patient. The man helped change the world of film criticism, and was a personal hero and voice of reason for many budding critics. The film tells the unique story of Ebert's rise to prominence, his presence in the public eye, and his illness, which would eventually take his life. This film does complete and honest justice to the memory of a great man, while also showing his pettiness, his garrulousness, and his affinity for feeling self-important. This is a film that shows a side of the famous scribe that not everyone has seen before, which is always refreshing when dealing with a very famous subject. Beautiful in many ways, this is a must see film for all film lovers.

A wonderful depiction of a man we thought of as the slightly grumpy uncle who visits our homes each week -- with his warts and all. The film was informative with great access to the people who could best tell us about Roger Ebert's life and person. Ebert and his family showed unflagging honesty and strength, even about the most painful and personal issues the audience might want to know about. The director has a talent for obtaining exceptionally personal stories and candid remembrances from those who knew him -- something I doubt many filmmakers could have achieved, and the reason this documentary is worth 5 stars. It may have been his final curtain call, but damn! What a show Ebert gave us.