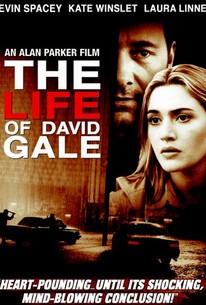 Critics Consensus: Instead of offering a convincing argument against the death penalty, this implausible, convoluted thriller pounds the viewer over the head with its message.

Critics Consensus: Instead of offering a convincing argument against the death penalty, this implausible, convoluted thriller pounds the viewer over the head with its message.

Critic Consensus: Instead of offering a convincing argument against the death penalty, this implausible, convoluted thriller pounds the viewer over the head with its message.

The Life of David Gale Photos

The mystery of one man's guilt or innocence literally becomes a matter of life and death in this drama. David Gale (Kevin Spacey) was the head of the philosophy department at Austin University and the author of several well-regarded books; he was also an active and visible member of Deathwatch, an anti-capital punishment activist group. One of Gale's best friends was Constance Harraway (Laura Linney), a fellow Deathwatch activist with whom he became especially close, particularly since Gale's wife, Sharon (Elizabeth Gast), who had taken a lover in Spain, was usually absent. One night, Gale was seduced by an attractive student from his class, Berlin (Rhona Mitra), who had too much to drink; later, the remorseful student accused Gale of rape. While Gale was eventually cleared of the charges, the negative publicity cost him his career as an educator, and with no job and no wife, Gale turned to drink. When Harraway was found raped and murdered a few years later, Gale was charged with the crime, and convicted despite the best efforts of his well-meaning but ineffectual lawyer Braxton Belyeu (Leon Rippy). Now Gale awaits execution, and less than a week before his date with the fatal injection, Gale agrees to tell his story to Bitsey Bloom (Kate Winslet), a nervy journalist from a major newsmagazine, who arrives with her assistant, Zack Stemmons (Gabriel Mann). As Bloom discusses the facts of the Harraway murder with Gale, it occurs to her that the details simply don't add up, and soon a mysterious stranger slips evidence to her that suggests Gale has been framed -- leaving Bloom and Stemmons only a few days to solve the mystery and save Gale from the executioner. The Life of David Gale was co-produced by actor Nicolas Cage, who originally commissioned the script and intended to star in the film before prior commitments led him to hand the project over to director Alan Parker.

Critic Reviews for The Life of David Gale

An overripe melodrama -- a time waster.

It would take an intellect far superior to mine to explain the rationale -- or, for that matter, the release -- of David Gale.

I ended up feeling sorry for Mr. Spacey, Ms. Winslet and Ms. Linney, so contrived was the foolishness in which they found themselves embroiled.

Suffers from Parker's same overindulgence in making points at the expense of making stories.

Grading on the curve, I give it high marks for trying something different, but somewhat lower ones for entertainment value.

Low thrills and high dudgeon are a bad mix.

...one of the most offensively cheap and concocted 'twist' endings of all time

Manages to offend the same people it seeks to defend with the most ridiculous and nonsensical endings that I've ever seen.

The filmmakers work so hard to bewilder and to preach that they give us no opportunity to think clearly about the serious life-and-death issues that the film claims to address.

... [Alan] Parker lures you into the theater, but then you sit down and all he has waiting for you is a whoopee cushion.

In arguing that calmly and deliberately taking a life can never be justified... it ends up arguing just the opposite. It's bad drama and worse politics.

Audience Reviews for The Life of David Gale

i really enjoyed this movie i thought it was very interesting and twist turning with a great storyline and plot. I liked how the story was focussed on trying to get point across, that innocent people do get murdered unjustly within the death penalty counties of america.

The critic community seemed hell-bound to pin down this movie as one belonging to the trash bag. The story about anti-capital-punishment activist David Gale, deals with an unpleasant issue, kind of an issue that no one really want to know the answer of. The film may have failed in terms of moral grounds in the eyes of its detractors, may be a reason why it has gotten so much bad press. But, this is also the story of a man whose life just went off the rails for all the wrong reasons, who wants to do something for the world before he leaves. In that perspective, this was a decent enough flick or even, I dare say rather inspiring. That being said, the movie is not without it's glitches. A not so challenging role for Kate Winslet considering her abilities, occasionally flawed narrative and an annoying background score which did'nt seem to connect anyway to the premise of the movie.

Cast: Kevin Spacey, Kate Winslet, Laura Linney, Gabriel Mann, Rhona Mitra, Leon Rippy, Matt Craven, Jim Beaver, Elizabeth Gast, Cleo King, Constance Jones, Brandy Little, Cindy Waite, Jesse De Luna, Vernon Grote Director: Alan Parker Summary: When Texas professor David Gale (Kevin Spacey), an advocate for the elimination of the death penalty, is falsely accused and convicted of the rape and murder of another activist (Laura Linney), he ends up on the state's notorious death row himself. In a series of flashbacks, Gale tells his story to a young reporter (Kate Winslet) who's visiting him on death row, leaving her to sort out his guilt or innocence. My Thoughts: "This has to be (in my opinion) one of the best suspense films I have seen. It's messy, doesn't really develop the characters that well, but I don't think its needed. It's not telling the story of these people, it's telling the story of the events that have happened in David Gales life that led him to where he's at. Great suspense all the way till the end. Never knew where the story was going and the ending was brilliant. The measures that they went to, to prove their point was extreme, but brilliantly done. It's a smart messy film with great performances by (my fav) Kevin Spacey, Kate Winslet, and Laura Linney. It's a must see in my opinion, so see it if you haven't."

"They destroy his life, his work, his memory...and they make him watch." The Life of David Gale tried very hard to be a thought-provoking movie that raises questions and encourages dialogue about a very important and divisive issue. Instead, it ended up being a preachy train wreck that's likely to bore you no matter what side (if any) you find yourself on in regard to the issue of the death penalty. There are two plot twist that instantly transformed this from a somewhat watchable mediocre movie (watchable because I'm such a fan of Spacey, Winslet, and Linney) to an absolute train wreck. They're so contrived and absurd that they completey derail the entire film (twice!). Someone should have locked writer Charles Randolph in his house and not let him out until he had replaced the awful second half of The Life of David Gale with something that didn't border on lunacy. Skip this. Whether you're for or against capital punishment won't change the fact that this is a bad movie.

The Life of David Gale Quotes