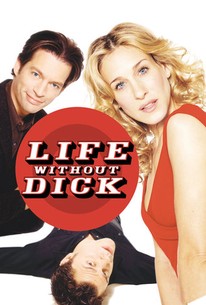 Can a woman find happiness with the thug she hired to murder her significant other? That's the 64,000-dollar question in this dark romantic comedy. Colleen (Sarah Jessica Parker) is a woman who is not at all happy with her boyfriend Dick (Johnny Knoxville) -- so unhappy, in fact, that she decides to hire Daniel (Harry Connick, Jr.), a hit man, in order to put him out of her life (and everyone else's) once and for all. However, as Colleen negotiates the killing with Daniel, she grows fond of the hired killer, and begins to sense that murder isn't his true calling. Daniel confesses that Colleen is right -- he loves to sing, and wants to put his execution contracts behind him so he can find work as a crooner. Colleen eagerly offers to manage Daniel's musical career, and he agrees to the offer, but there's a catch -- he'll need someone to help him wrap up his last few killings before he can pursue music full time. Life Without Dick also stars Craig Ferguson, Teri Garr, and Claudia Schiffer.

Ever Carradine
as Tina

Critic Reviews for Life Without Dick

There are no critic reviews yet for Life Without Dick. Keep checking Rotten Tomatoes for updates!

Audience Reviews for Life Without Dick

Dark comedy. Colleen's pyschic tells her that her boyfriend is going to leave her so she accidentally kills him. She meets and falls for the hitman who is trying to kill her boyfriend. He fails as the victim is already dead. Interesting plot.