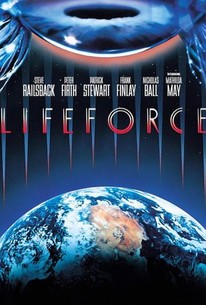 Critics Consensus: Brazenly strange and uneven in its execution, Lifeforce is an otherworldly sci-fi excursion punctuated with off-kilter horror flourishes.

Critic Consensus: Brazenly strange and uneven in its execution, Lifeforce is an otherworldly sci-fi excursion punctuated with off-kilter horror flourishes.

When alien vampires terrorize London, it's up to a determined police inspector and an astronaut to stop them. American and British space travelers discover humanoids while exploring near Halley's Comet. The astronauts bring three of these aliens aboard their spaceship and head back to earth. However, their guests turn out to be evil vampires who kill all but one of the astronauts -- Carlsen. After the ship arrives in London, the monsters -- led by a beautiful female -- escape and wreak havoc throughout the city, transforming humans into zombies. Meanwhile, the surviving astronaut and Caine, a determined police inspector, frantically try to track down the creatures, and destroy them. But the "Space Girl" has a strange hold over Carlsen, and he has trouble fighting the urge to join her.

Mathilda May
as Space Girl

Lifeforce is a dog.

Frequently outlandish and far from profound, it's nonetheless a box-office bomb that, like its horror-maestro director, deserved quite a bit better.

Needed to be much trashier.

...undeniably best taken with a huge dose of salt on your popcorn but it works brilliantly as an impressively-staged dose of cheesy sci-fi fun.

The seriousness with which the actors approach the material is commendable.

Has a tendency to get too caught up in the details of its strange plot, but overall the film is a strong and oft-overlooked piece of 1980s science fiction.

Not near one of Hooper's best, at its core Lifeforce is the dark heart of all humankind's anxieties about extraterrestrials.

Combining outer space adventure with late show horror might seem a great way to double your audience, but Lifeforce doesn't do real well in either genre.

It loses some respect with its naked Mathilda May. But I would call this an audacious SF/horror film

"The American cut - with its Michael Kamen music - is the superior version of the film..."

Seen today, it's actually an astoundingly brave, weird movie that tries more and accomplishes more than many of today's bland roller coaster rides.

A tribute to the Quatermass serials of yesteryear as well as a hodgepodge of other elements, 'Lifeforce' is one of the most messily dazzling science-fiction epics of the last quarter-century. Tobe Hooper was still in an experimental phase after 'Poltergeist' was wrested away from him by producer Steven Spielberg. The opening music with the London Symphony Orchestra reminds one of '2001' but the film quickly deviates into more addlepated territory. The film is very episodic in nature and it hopscotches from cosmic vampires to telepathic interspecies links to an apocalyptic movie. Dan O'Bannon and Don Jakoby are from the kitchen-sink school and they toss every wildly bombastic idea into the soufflé and for the most part, 'Lifeforce' is successful in its ambitiously lofty goals. The mammoth set aboard the 150-mile long spaceship are quite breathtaking in their scale for a Cannon production. Of course, any movie where Steve Railsback kisses Patrick Stewart because he is a female avatar isn't lacking a morbid sense of humor. For those with a strictly lustful interest in the film, Mathilda May's curvaceous body is on full display throughout most of the movie. As a style-over-substance picture, 'Lifeforce' is thunderously awe-inspiring and reconfirms Hooper's grasp of outlandish horror (the reanimated skeletons are undeniably goofy puppets).

Tobe Hooper has always pushed the envelope in terms of delivering effective horror to an audience. This is one of those horror films that takes a few viewings to really get into due to the fact that it's quite bizarre and eccentric. The premise is quite interesting, but does leave something to be desired. The film boasts some impressive sequences of terror with great gore. Lifeforce is an interesting concept for a film that is based around space vampires, and with that being said, it is an idea that should have been great, but as it stands, only ends up being good. I say that because the final act of the film leaves a lot to be desired and with we've seen in the impressive first hour and a half, the ending is a bit disappointing, and you can clearly see that the filmmakers were struggling with the ending. Despite its ending, this is an accomplished horror film that relies on great effects and a well structured plot to terrify and immerse the viewer into the film. This may not be the best Tobe Hooper film, but it is quite overlooked. I admit I really didn't enjoy this one upon a first viewing, but after watching the director's cut of the film, which is far superior, I really got into this one. The film is bizarre, but it tries to be different, and it works well enough to keep you on the edge of your seat. The ending could have been reworked, but overall this is a good film that should be seen by Tobe Hooper fans. Lifeforce is not a great film, but it is a good horror yarn that tries to do something different in the medium, and it does it in a way to make you take notice and appreciate what the filmmakers have done here. This is an overlooked picture that is far better the second time around, and ranks up there as among Hooper's most eccentric works.

Space Girl: The web of destiny carries your blood and soul back to the genesis of my lifeform.  "In a blink of an eye, the terror begins." Lifeforce is the first Tobe Hooper film I haven't liked. Granted I have only seen four of  his movies. But I loved the other three I have seen; Poltergeist, Texas Chainsaw Massacre and The Funhouse. Poltergeist and TCM are considered two elite films when it comes to the horror genre. But Lifeforce is borderline unwatchable. It's ridiculous but cool premise washes away after about 20 minutes and starts becoming a boring mix of vampires and zombies. When the best part of a movie is a vampires body, then there's something really wrong with the movie. I hate to say it but when they put clothes on the girl is when I lost interest. There was something watchable about a naked girl walking slowly around and causing crazy stuff to happen that didn't translate well to that same girl walking around in clothes causing crazy stuff to happen. Lifeforce is a bad sci-fi film. It's definitely not very memorable like Poltergeist or TCM, or even The Funhouse. It's not fun to watch and actually just keeps getting more and more boring as the movie goes on. It's not really worth a look unless you like bad horror movies a lot. But be aware that this movie doesn't fall into the so bad, it's good category of horror. It's just bad.

A British and American joint shuttle mission (aboard the shuttle Churchill) is up above the earths atmosphere doing research on the comet when they notice something weird clinging onto the front of it and they get a radar readout and see that it is a craft of some sort, the crew is able to get the shuttle close enough to do a spacewalk and investigate the craft and Col. Tom Carlsen takes his crew into an open spot and sees hundreds of dead bat like creatures, and they have been drained of all of their fluids. While investigating, a portal opens up and the crew decides to go inside to check out whats actually in the inner layer of the ship. They discover three human figures, two male and one female enclosed in some sort of crystal cases. They are all drawn to the figures and loosen their cases and bring them back upon the ship. 30 days later the shuttle is due to arrive back on earth, but when they hear no radio communication, another shuttle is dispatched to dock up with them and find out what went wrong, the entire crew of the original shuttle is found to be burnt to a crisp and the three alien figures are brought back to earth. funnily enough, the escape pod from the shuttle is missing.......