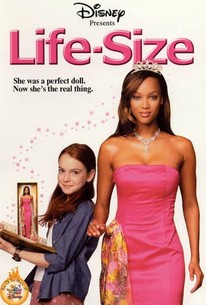 A girl unwittingly gives new meaning to the phrase "living doll" in this comic fantasy. After the death of her mother, 14-year-old Casey (Lindsay Lohan) is despondent. As she and her father Ben (Jere Burns) begin to drift apart, Casey finds a book of magic spells and tries to use one to bring her mother back to life. But the plan backfires, and instead she finds that she's animated Eve (Tyra Banks), a fashion-plate dress-up doll. Eve is excited to be both alive and nearly six feet tall, but she has a lot to learn about living in the real world -- and Casey isn't so sure she has the desire or the patience to teach her. Life Size was produced for The Disney Channel and first aired in the spring of 2000.

The acting is terrible, the script is soggy, but it has a ridiculous earnestness that's earned Banks a legion of younger fans.

A lovable family adventure for the entire family. It seems like it has been somehow done before, but so what?

Fun movie about a doll that comes to life.

tyra banks is gorgeous. that eve song is surprisingly addicting. and lindsay is still cute.

Okay, this movie sucks, but it made me cry when I was eight years old. Don't judge me!