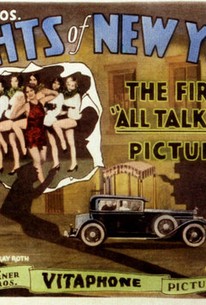 Contrary to popular belief, no one speaks into microphones hidden in vases in this, the first 100% "all-talking" feature film, although an oversized telephone prop is rather conveniently placed near the actors in one long sequence. Although not nearly as crude as its tattered reputation, Lights of New York is far from thrilling, however. Not so much due to the later so maligned sound-on-disc Vitaphone system, but mainly because this was really a quickie B-Movie helmed by a first time director, Bryan Foy, who seems to have been little more than an inefficient traffic cop. Not that there is all that much traffic in this stage-bound melodrama about Eddie (Cullen Landis), a young kid from Upstate New York conned into fronting for a speakeasy on Broadway. There is the inevitable chorus-girl with a heart of gold (top-billed Helene Costello), the downtrodden floozy (Gladys Brockwell), and a cop-killing gangster boss, Hawk Miller (Wheeler Oakman), whom screenwriters Hugh Herbert and Murray Roth furnished with the film's one memorable line. With the cops closing in on him, Hawk needs a patsy. Planting contraband in poor Eddie's shop, the gang leader then instructs his henchmen to "take. . .him. . .for. . .a. . .ride!" Oakman speaks this much parodied line slowly and in a stentorian manner, lest the audience should fail to understand the grave implications. But Eddie escapes his "ride," and there is a final confrontation. Just as all hope seems lost, Hawk is killed by persons unknown. The murder weapon, however, belongs to the chorus girl and she is about to be arrested by no-nonsense Detective Crosby (Robert Elliott), when the real murderer -- the downtrodden floozy -- gives herself up. The performances in this historic talking picture run the gamut from inept (Costello, Landis) to over-the-top (Brockwell) to adequate (Oakman, comic sidekick Eugene Palette). Perhaps due to the newness of it all, the actors keep flubbing their line -- the poor Miss Costello being the worst offender, with Tom Dugan, a veteran supporting player, a close second. Why Warner Bros. should have chosen this pedestrian gangster melodrama as the first full-length talking picture remains a mystery. The best explanation is that the studio was merely testing the waters. Rather than a prestige project like the previous year's groundbreaking part-talkie The Jazz Singer, Lights of New York was produced for a paltry $23,000 and released not on a reserved-seat basis but in a mere grind house. But to everyone's surprise, the film went on to gross over a million dollars in its first run, proving once and for all that talkies had come to stay. Today, Lights of New York remains a museum piece but despite its tattered reputation, the gangster melodrama is really no worse than the majority of low-budget early talkies. ~ Hans J. Wollstein, Rovi

There are no critic reviews yet for Lights of New York. Keep checking Rotten Tomatoes for updates!

There are no featured reviews for Lights of New York at this time.