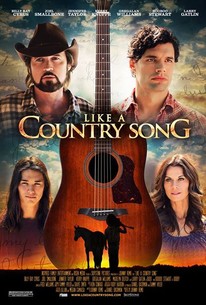 "Like a Country Song" is a story about JAKE REESON, an up and coming country singer who has the whole world in his hands until his ego gets in the way. With nothing but partying and music on his mind, Jake is forced to take a hard look at himself and the ashes around him after life and his singing career slowly falls apart. Jake's old flame, BECCA, suddenly reappears back in his life after seeing her again at a local music show. Good girl Becca, never forgetting who Jake is, makes him work for it only to fall for him again. His mother, MIA, harbors a painful secret... the father Jake thought was dead is alive. To protect Jake from the pain of knowing what his father, BO, had become after a horrible accident, Mia thought it best if Jake believed BO was dead. Jake eventually has a "random" encounter with BO on the street in a Nashville suburb that sets off a chain of events to bring Bo back into his life and hopefully reconciliation to the family. "Like a Country Song" is a story about Humility, Forgiveness, and Redemption in the presence of Pain and Burden. "MATTHEW 11:28" Come to me, all you who are weary and burdened, and I will give you rest. (C) Official Site

Larry Gatlin
as Buck
View All

There are no critic reviews yet for Like a Country Song. Keep checking Rotten Tomatoes for updates!

There are no featured reviews for Like a Country Song at this time.