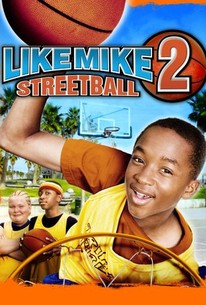 Forget about the arena, because in this sequel to the 2002 slam-dunk basketball hit Like Mike, it's all about the quest to become the King of Concrete. Jerome Jenkins Jr. is a pint-sized street-ball player with larger-than-life dreams of dominating the open-air court. Vertically challenged, uncoordinated, and decidedly lacking in speed, Jerome fails to earn the respect of his peers on the court until he discovers a mysterious pair of sneakers that instill him with the power to make his dreams of winning become reality. Now, as Jerome's newfound talents send him rocketing to street stardom and his swelling ego eclipses his youthful sense of wonder, it's up to the street-ball superstar's family and friends to show him what it really means to be a winner on the court as well as off. ~ Jason Buchanan, Rovi

Not bad, but not good either!

I think that if I was like some people saying" Standard Film, Mediocre, Worth one watch or too, Nothing Special here, A Nice Edition to my collection, Could be worth watching, will see and eat with my eyes, or that nonsense, I would be a super reviewer,too! Yet when there is a movie this out of whack, you kind know that it isn't any good, or worth giving a great long edited review.