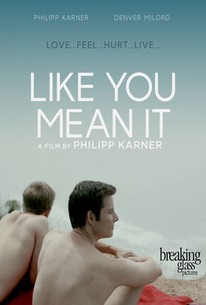 Mark has been with his boyfriend Jonah for 3 years. When Mark receives news of his father's death, cracks begin to show between the two. Jonah suggests Mark go back on anti-depressants but Mark makes an appointment with a couple's counselor instead. When exercises fail to work, Mark caves and begins to take medication. Things improve until Mark has a severe panic attack. At therapy, Mark questions if he truly loves Jonah anymore. Returning home, he is confronted by his estranged sister. Mark re-connects with her and considers being a part of his family again. At a final therapy session, Mark ends the relationship. Months later, they meet at their friend's wedding, where Mark expresses his gratitude for their time together.

The last gasps of a romantic relationship between two very different men are intimately and delicately charted in the beautifully immersive, if decidedly somber, "Like You Mean It."

Like You Mean It is an honest portrait of love in crisis and rather than dwelling in those dramatic tropes especially typical of gay relationships on film, it uses them to dig deep into a man's psyche and inner demons uncompromisingly.

Nicely underplayed and unmelodramatic film about the beginning of the end of a relationship - - one that is unfairly but utterly realistically weighed. Lead character Mark (played by Philipp Karner who also wrote & directed the film) is massively flawed yet somehow always likeable even when doing unlikeable things, and the viewer roots for him and what's him to make the right decisions. Like You Mean It won't change the world, but it is beautifully shot, very well acted & written, absorbing, and ends perfectly.