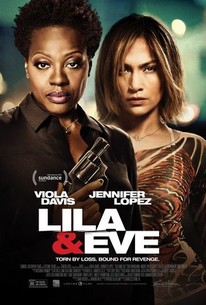 Critics Consensus: Lila & Eve gets some mileage out of its formidable stars, with Viola Davis in particular proving that she will commandingly commit to any material, but this is a revenge flick served stale due to a lackluster script.

Critics Consensus: Lila & Eve gets some mileage out of its formidable stars, with Viola Davis in particular proving that she will commandingly commit to any material, but this is a revenge flick served stale due to a lackluster script.

Critic Consensus: Lila & Eve gets some mileage out of its formidable stars, with Viola Davis in particular proving that she will commandingly commit to any material, but this is a revenge flick served stale due to a lackluster script.

A tense and exciting film, LILA AND EVE is directed by Charles Stone III (DRUMLINE), and tells the story of Lila (Academy Award (R) Nominee Viola Davis), a grief-stricken mother who in the aftermath of her son's murder in a drive-by shooting attends a support group where she meets Eve (Jennifer Lopez), who has lost her daughter. When Lila hits numerous roadblocks from the police in bringing justice for her son's slaying, Eve urges Lila to take matters into her own hands to track down her son's killers. The two women soon embark on a violent pursuit of justice, as they work to the top of the chain of drug dealers to avenge the murder of Lila's son. (C) Samuel Goldwyn

Will Brittain
as Bradley

Atkins Estimond
as Jamie
View All

While it could have easily been a pretty great Lifetime movie of the week, what LILA & EVE has going for it is that it's not what you expect.

The footage rolls to an ending that is satisfying and makes the time it takes to watch this crime thriller evolve worth the effort. Lila & Eve will someday be a great cable movie. For right now it is a compelling indie film.

Davis (who was an executive producer on the film) gives a strong performance, as if she were acting in one of those many prestige projects lighting up her resume. It's a noble try, but this dreck is beyond saving.

Alas, even a promising premise and a fine actress like Davis can't save an increasingly ludicrous plot. Justice may be served, but screenwriting logic? Not so much.

Davis (who also served as a co-producer) does her damnedest to make something of her character and while not even her undeniable gifts make anything of it, it is oddly inspiring to see her at least making the effort.

"Lila and Eve" deteriorates into a tawdry shoot-'em-up whose screenplay takes an ill-advised surreal twist that propels the movie deep into the ozone.

So okay, Lila & Eve is basically a Lifetime movie with better production values, or Fight Club starring middle-aged ladies (an improvement, if you ask me). But [Viola] Davis' performance just destroyed me.

Lila & Eve has all the makings of a cult hit.

...tumbles off the rails long before the end credits roll.

Lila & Eve embraces its psychological thrills rather than action, but it never fully commits to what that decision entails.

There's no saving a high-voltage revenge drama that relies on selfies for its big reveal.

Learning by doing, the avenging angels roll up on some thugs in a convenience store parking lot, infiltrate a hot dance club and home-invade a high-rise apartment; they also find time to wallpaper Lila's living room (Eve is an interior decorator, see).

Technically speaking, this is my 2900th review on this website. But, really, I should already be past 2900 reviews. The last movie I watched prior to this one was a South Korean suspense thriller (Circle of Atonement, which is on Amazon Prime) that's not available to review here. And that's not the only one I've seen recently that isn't on here. There's plenty of films that I've seen that I haven't reviewed for that very reason. That's neither here nor there, really, it's not like it matters in the long run, but it's something that's worth pointing out. Part of me always tries to make these 'momentous' reviews special. Or at least I try to watch a film that's special in order to make the review more memorable, for me at least, since it's not like I have regular readers. Sometimes it works out (don't ask me, since my memory is absolute shit) and most times it doesn't work. This is one of those times where it certainly did not work. That's not to say that this movie is bad, it's actually a perfectly decent movie, it's just not even remotely memorable or special. Where do I get started? I suppose I should begin with the surprising fact that this may actually be Jennifer Lopez's best performance yet. I realize that's not saying much, since Lopez isn't actually a great actress (or even a good one), but she's legitimately good here. I suppose given the fact that Lopez is, in fact, a mother and she can relate to a script like this. I don't even have to say anything about Viola Davis, she is tremendous here, as she always is in everything she does. Viola and Jennifer are, really, the only reason the film gets the rating it did. Because as far as vigilante/revenge thrillers go, this is a fairly second rate movie. I wish that didn't sound as derisive as it does, but there's nothing even remotely special about this story. It's as straightforward as it sounds. Two mothers, Eve (Jennifer Lopez) living vicariously through Lila (Viola Davis), go on this journey to avenge the murder of Lila's son, who was just in the wrong place at the wrong time. The story is simple and a little impersonal in that Lila and Eve just go from A to B to C. Everything they do leads them one step closer to the person who's actually responsible for Lila's son's death. And I just didn't find that it worked, because it's got sort of a mechanical feel to it. Like there's no life or inspiration to any of it. And there's even the built-in angle of Lila and Eve are causing many mothers to go through exactly the same thing that they went through, regardless of the fact that a lot of these people murdered aren't precisely innocent. And they do actually tease some of that, as the mother of two of the people Lila murdered goes to her support group (which is where she met Lila). The problem with the fact is that there's no real moral conundrum here, there's just that one scene. Lila and Eve never once struggle with the consequences of their actions and the harm they are bringing to other families. I suppose the movie tries to juggle many themes, but this is the most interesting one of them all and they just completely drop the ball on this one. Lila also has to deal with another son that she is failing to give proper attention due to this her search for justice. There's, obviously, a detective going around investigating the murders of these drug dealers and trying to find the connection between all of them. Another big problem with the narrative is that it has this twist, a twist that I'm sure most of you will see coming from a mile away. You'll notice very early on that no one who's close to Lila have ever met Eve and that's a big clue. In fact, you can say that I just spoiled the entire twist. And, honestly, I don't know how I feel about it. Because sometimes this 'it was all construct of a warped person's mind' can feel cheap, but it can also work like it did in Fight Club. It's half and half here, because Eve was a character that was essential to moving the narrative forward. Lila needed a part of her to justify her actions and she created Eve, as a result of her grief and anger, to give her that outlet to do precisely what she wanted to do to the people who murdered her son. There's the other side of the coin, where there are occasions, like when Lila and Eve first meet, that Lila is talking to a person that isn't there at all. I honestly can't recall if the support group meeting let out or Lila just left early, but it's a little weird. All the other meetings take place, mostly, away from prying eyes, like at Lila's house. So it works and it doesn't, but I can sort of buy into Lila's mind being so fragile enough that she'd do what she did. And that is all because of Viola Davis' performance, she makes it work even if there's more questions to be asked than answers. But, I digress, I can't really say enough about this film. Viola and Jennifer certainly elevate a below average script and they help make this into an average movie. I can't really say you should go out of your way to see this, but at least you get some great performances for your troubles, even if the film isn't what I would call good.

Dark and edgy, Lila and Eve is a fairly decent psychological thriller. After her eldest son is killed in a drive-by shooting, Lila seeks out a victim's support group for mothers where she then partners with a sponsor who feeds her urges for vengeance. Jennifer Lopez gives a strong performance, but the rest of the cast isn't much more than serviceable. Also, the plot is pretty convoluted, and takes some rather strange turns. However, the directing does a good job at creating tension and atmosphere. Lila and Eve has a few problems, but overall it's an entertaining revenge film.

The timing for the release of Lila and Eve may have been perfect, it's just a shame the movie wasn't. Jennifer Lopez I can understand, but Viola Davis is a multi-Academy Award nominated actress! I cannot for the life of me understand what drew her to such an underdeveloped script. If this wasn't straight to video, it sure as Hell should have been.