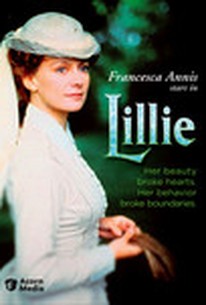 Francesca Annis, previously seen on the Masterpiece Theatre presentation of Madame Bovary, plays the title role in the 13-installment Masterpiece offering Lillie. This is the story of legendary British actress Lillie Langtry, who during the Victorian and Edwardian era was as celebrated for her romantic pursuits as her theatrical accomplishments. We first see Lillie Le Breton living with her family on the isle of Jersey, escaping the strictures of her environment by marrying wealthy Edward Langtry (Anton Rodgers). When this marriage proves as confining as her previous existence, Lillie kicks over the traces and becomes an actress. Before long, she is the toast of London, and the object of every man's desires. Her admirers range from Belgium's King Leopold (Derek Smith) to the Prince of Wales (Dennis Lili) to American "hangin' judge" Roy Bean (Tommy Duggan) Even homosexual playwright Oscar Wilde is so smitten by Lillie that he writes Lady Windemere's Fan specifically for her. The story ends with Lillie undergoing a domestic crisis with her grown daughter (Joanna David). Lillie was originally telecast on PBS from March 11 through June 3, 1979. ~ Hal Erickson, Rovi

Dennis Lili
as Prince of Wales

Annis inhabits Lillie with subtlety and in three dimensions, giving us plenty of room to admire the classy crumpet's self-possession and stick-to-it-iveness in a society that valued conformity and propriety above all else.

There are no featured reviews for Lillie at this time.