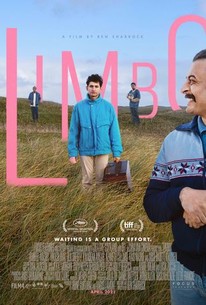 Critics Consensus: A profoundly uplifting portrait of the refugee experience, Limbo is distinguished by its offbeat tone -- and overall impressive work from debuting director Ben Sharrock.

Critics Consensus: A profoundly uplifting portrait of the refugee experience, Limbo is distinguished by its offbeat tone -- and overall impressive work from debuting director Ben Sharrock.

Critic Consensus: A profoundly uplifting portrait of the refugee experience, Limbo is distinguished by its offbeat tone -- and overall impressive work from debuting director Ben Sharrock.

Recently nominated for two BAFTA (R) awards for Best British Film and Best Debut by a British Writer, Director or Producer, LIMBO is a wry and poignant observation of the refugee experience, set on a fictional remote Scottish island where a group of new arrivals await the results of their asylum claims. It centers on Omar, a young Syrian musician who is burdened by his grandfather's oud, which he has carried all the way from his homeland. Reflecting the complexity of the movement of people across borders has been a long-held passion for director and writer Ben Sharrock, who spent time working for an NGO in refugee camps in southern Algeria and living in Damascus in 2009 shortly before the outbreak of the Syrian civil war. There, he formed a network of friends whose personal stories inspired the film.

Silvie Furneaux
as Cheryl
View All

The 88 Most Anticipated Movies of 2021
The BAFTA Film Awards 2021 Nominations: Nomadland and Rocks Dominate, Horror Hit His House Surprises

For a film that is so infused with sadness... Limbo is remarkably funny - a gentle, empathic kind of humour that is derived from the men's bleak existences, without mocking them.

A wonderful comedy that savours its remote environment while keeping its subjects at the centre of the story.

Sharrock has adopted a Keatonesque deadpan aesthetic that feels arrived at via a few different places.

A film as sweet as it is sad, as pertinent as it is absurd, Limbo is an experience where not much seems to happen but where little things mean the world.

Desperate, but also wryly comic, as if writer-director Ben Sharrock sees them as stuck in a real-life Waiting For Godot, stranded in a starkly beautiful no-man's-land, hoping against hope that it will prove more hospitable than the ones they left behind.

Elegant simplicity itself, where droll deadpan humour, terrific performances and a humanistic vision combine to deliver a powerful refugee drama that is one of the best

While Limbo is well-made, well-written and well-acted, it won't appeal to everyone, as it is slow-paced and deadpan. I thought it was great.

Throughout it all, the British Egyptian El-Masry is a marvel, never once overplaying his hand or italicising the role for effect.

Sharrock touches upon a fundamental aspect of the Middle Eastern relationship to Europe and the West: the emotional agony of the wait; the realisation that one's destiny is not in one's hands.

Limbo is difficult to forget.

Both heartbreaking and wryly funny...

There are no featured reviews for Limbo at this time.