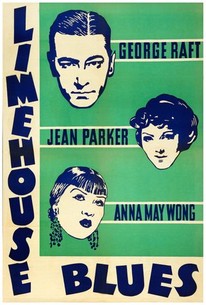 It's "Never the twain shall meet" time again, this time in London's Limehouse district. George Raft stars as Harry Young, a half-caste saloonkeeper who shelters beleaguered white girl Toni (Jean Parker) from her tormentors (shades of Broken Blossoms). Harry falls in love with the girl, but mixing of the races was still a Hollywood no-no in 1934, so tragedy results -- except for Toni, who finds happiness in the arms of Eric Benton (Kent Taylor), a man of "her own kind." The highly eclectic cast includes Anna May Wong as Raft's obligatory cast-off sweetheart Tu Tuan, former 2-reel comic Billy Bevan, and in a tiny uncredited role, Ann Sheridan. To avoid confusion with another Limehouse Blues, this one was retitled East End Chant for television.

Anna May Wong
as Tu Tuan

James May (I)
as Taxi Driver

Ann Sheridan
as Girl with Couples

Keith Hitchcock
as Policeman
View All

Even those filmgoers who are most successful in fighting off Mr. Raft's overpowering personal allure can hardly blame him for the frailties of Limehouse Blues.

The abiding memory of Limehouse Blues is of violence, unreality, and an exuberance of Americanism, which seems somewhat out of place in London's East End.

An antiquated story with only one redeeming feature -- good production.

Wong scores best, perhaps because she is the only one of the leads who is not miscast. Otherwise, every other cast member plays over the top.

There are no featured reviews for Limehouse Blues at this time.