The Limits of Control2009 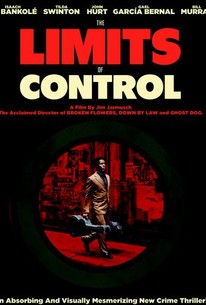 Critics Consensus: A minimalist exercise in not much of anything, The Limits of Control is a tedious viewing experience with little reward.

Critics Consensus: A minimalist exercise in not much of anything, The Limits of Control is a tedious viewing experience with little reward.

Critic Consensus: A minimalist exercise in not much of anything, The Limits of Control is a tedious viewing experience with little reward.

The Limits of Control Photos

The story follows a mysterious loner, a stranger to all, whose activities and workings remain meticulously outside the law. He is currently in the process of completing a job and trusts no one, while his objectives initially remain unrevealed. His journey, paradoxically both intently focused and dreamlike, takes him not only across Spain but also through his own consciousness. The film uses no names and refers to all characters by description and appearances only.

Luis Tosar
as Violin
View All

Critic Reviews for The Limits of Control

Cool, handsome, self-assured... but, as the existentialists might say, what's the bloody point?

A work of dazzling formal discipline that riffs on the simple notion of repetition and variation.

It's bold, confrontational cinema that will, as its author intended, have you questioning at every turn just what it is you expect from a modern movie, and more importantly, why.

This shallow conundrum is at once a dull thriller and a humourless comedy, the sort of colossally self-indulgent and boring film that only a successful and revered director could make - or be allowed to make.

If you need a working definition for bad Jarmusch, look no further than The Limits of Control, which functions more as a wilful act of self-pleasuring than worthwhile experiment.

This is a demanding film that will no doubt fuel the art-house naysayers, yet set against a vivid Spanish canvas Jarmusch's poetic pretensions become not only explicable but palatable as well.

Less hypnotic than Dead Man but infinitely more interesting than anything else he's done since, Limits of Control is more of an exercise in Jarmusch-ism.

Only Jarmusch can get away with pretentious movie about art like this. Less hypnotic than Dead Man but infinitely more interesting than anything else he's done since, Limits of Control is more of an exercise in Jarmusch-ism.

What begins as an exercise in existentialism and surrealism graduates into the amateurish experiment of a hitman procedural.

Some will find [Jarmusch's] excavation intriguing. The rest of us may long for the enticements of meaningful dialogue, character, and story, and a compelling film hero to make it all feel worthwhile.

The visual and the aural are what make this film such a delight to watch, as Mr. Jarmusch is a metafilmmaker who delights in subverting film's narrative conventions and genre expectations.

Audience Reviews for The Limits of Control

I think my friend and fellow Flixster reviewer rthornhill said it best with his take on this film: "slow, repetitious, minimalistic..... yet strangely intriguing". This is another low key and atmospheric mood piece by Jim Jarmusch, although I think all of his films could be described that way. This follows a lone wolf criminal type on assignment in Spain. He keeps a pretty strict and meticulous routine, and is pretty set in his ways. Along the way he meets an assortment of individuals who give him information and conversation about a variety of topics (all of it pretty vague and cryptic) that serve as both part of his work, and as things to think about. Even as a fan of Jarmusch's work, I found this one to be pretty tough to sit through. It's slow, quiet, largely uneventful, but still oddly captivating and mesmerizing. I definitely wouldn't recommend this as a starting point for Jarmusch neophytes. Even though the film was apparently written in a very short amount of time (and it shows), it is very well shot, features beautiful locations, and has a top notch ensemble cast, even though most are only in it for a bit, and none of them are really fleshed out. I also really dug the soundtrack, with most of it being done by Japanese experimental/ambient art rock group Boris. The music is very fitting, and is nice to listen to, especially if you want undistracting background tunes. I suppose the performances are fine. I mean, we don't really know much about the characters or their place in the world, but I guess that might be the point. Jarmusch is a fan of sparseness and existentialism after all. It's sad that Isaach De Bankole will probably never be known to the mainstream, but he fares well in the indie world, and that doesn't change here. I also liked seeing Paz de la Huerta, but that might be if only for the fact that, for whatever reason, her character is always shown either totally nude or wearing nothing but a transparent raincoat. Bernal and Hurt and Murray are fine too I guess. This is the sort of thing you really need to be in the right mood and frame of mind for, but if you are, then you might dig its deliberate execution. That being said, I was mostly tuned into this film's frequency, but the ending does lack a much needed climax to end on.

Jim Jarmusch has always been a director that's very particular in his structure, his pace and his mood. Some of his films are more successful than others and often they are not everybody's cup of tea. So, if your not a fan, avoid this one completely. A mysterious, nameless assassin (Isaach De Bankole) travels across Spain on some kind of criminal mission. Wandering throughout the picturesque city he comes across an incalculable ensemble of oddballs who join him in drinking coffee, passing him matchboxes with directions contained inside and delivering existenstial monologues and advice. This offering from Jarmusch could been seen as a self-indulgent experiment and it will most definitely not appeal to everyone. The length approaches 2hrs and the pace is very meditative indeed. It's quite possibly one of the slowest films I've ever seen. Yet, despite this, I found it also retained a sense of purpose. It always looked like it had a reason and a direction, although it was never exactly clear what they were. The first 20 mins alone consist of De Bankole just walking around. Then, doing a spot of Tai Chi. Drinking an Espresso. More Tai Chi. The occasional meeting with eccentric strangers and their philosophical meanderings. More Espresso and then at least half an hour passes before he realises he's forgotten to do his Tai Chi, before promptly doing so again. Believe me, that's all that happens throughout but I still found it captivating and real. The locations are wonderful and perfectly captured by the excellent cinematographer Christopher Doyle, who crafts a dreamlike painting of a film. If you can imagine a mixture of the George Clooney film "The American" with Richard Linklater's "Waking Life" then this would be the result. Having just recently viewed the documentary "Exit Through the Gift Shop", which explores the difference between art and pretentiousness, this would make a nice companion piece to discuss along with it. Arrogant filmaking from the experimental Jim Jarmusch that's not for all tastes but it's highly meditative and epitomises it's title in 'the limit of control'. I loved it.

If there was ever a movie you could us the phrase "you'll either love it or hate it" to describe, The Limits of Control is that movie. I really wish I didn't read Dr. Benway's review (link below) because he nailed it beautifully and there's really not much more to say. Like its soundtrack (courtesy of Boris, Sunn O))) and Earth), the movie doesn't take the obvious straight line route to get its point across and drowns you in beautiful space, imagery and cryptic half-moments. If it wasn't for the utter lack of madness, you'd think this movie was directed by David Lynch. Like Dr. Benway, I was overcome by fascination which eventually gave way to boredom (I fell asleep, but in my defense it was like 2AM when I watched this) then appreciation. Dr. Benway's review.

The Limits Of Control is beautifully filmed, easy and difficult to grasp, and you will either love it or hate it. In other words, it's an art house movie to the fullest. I started off fascinated, then I got bored, and then I ended up really liking it. Though the movie is nearly 2 hours long, its' actual story could be conveyed in five minutes. A semi-psychedelic, neo-noir set in Spain. Its' narrative is as ambient as the drone-metal soundtrack to include some of my favorite bands Sun 0))), Boris, and Earth. Much like the bands listed, its' minimalist approach may be irritating to some as is the droning, repetitive nature of the film. Isaach De Bankole was great and some of the cameos were really enjoyable while others had me tempted to fast forward. I enjoyed it, for the most part, but also imagined this is what sitting though a David Lynch film must be like for those who aren't a fan of such.

The Limits of Control Quotes