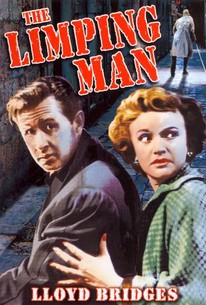 His Hollywood career temporarily in the doldrums in 1953, Lloyd Bridges headed to Britain to star in The Limping Man. Bridges plays an ex-GI who arrives in London to visit his wartime amour (Moira Lister). Before anyone knows what's happened, our hero is mixed up in a murder case. The victim was killed by a mysterious "limping man," who is also an expert sharpshooter. Just when it seems that events have overwhelmed the GI and his lady love, the story suddenly. . .well, that would be tattling, wouldn't it? The Limping Man was released Stateside by Lippert Productions.

Lloyd Bridges
as Frank Prior

Irissa Cooper
as Cynthia - the maid

Raymond Rollett
as Jones - the publican
View All

Critic Reviews for The Limping Man

It's about a bad, a disappointing and a phony ending as I ever witnessed to a movie.

Audience Reviews for The Limping Man

This Brit production has the overall feel of a potluck dinner, bits and pieces of other meals put together for a not totally appetizing result. Lloyd Bridges is an American soldier returned after 6 years to the wartime London fling he enjoyed previously. Moira Lister has the unhappy task of tying up as many loose ends as the writer, unfortunately, spews forth, and the works seems to have her at her wit's end as murder unexpectedly changes what may have been a happy reunion. The whole piece feels artificially contrived until the ending which tacks on such an over-the-top and obvious contrivance as to awaken anger in the viewer where only mild curiosity dwelt before. Eh.