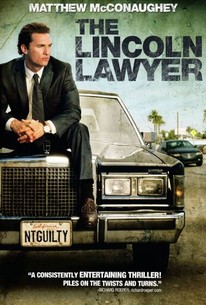 Critics Consensus: It doesn't offer any twists on the predictable courtroom thriller formula, but with a charming Matthew McConaughey leading its solid cast, The Lincoln Lawyer offers briskly enjoyable entertainment.

Critics Consensus: It doesn't offer any twists on the predictable courtroom thriller formula, but with a charming Matthew McConaughey leading its solid cast, The Lincoln Lawyer offers briskly enjoyable entertainment.

Critic Consensus: It doesn't offer any twists on the predictable courtroom thriller formula, but with a charming Matthew McConaughey leading its solid cast, The Lincoln Lawyer offers briskly enjoyable entertainment.

Matthew McConaughey stars in this legal thriller as a low-rent defense attorney named Mickey Haller. Most of the time, Mickey barely keeps his head above water, representing low-life clients and working out of the back of his car. He thinks he's landed the case of a lifetime when he's hired to defend a rich playboy (Ryan Phillippe) who stands accused of rape and attempted murder, and eagerly accepts his new client and the massive payoff that's sure to come with him. But Mickey soon discovers that he's become ensnared in a twisted plot where no fee in the world is high enough to pay for the deadly workload, and his only hope of survival may just lay in his own skills as a long-practiced double-crosser. ~ Jason Buchanan, Rovi

News & Interviews for The Lincoln Lawyer

View All The Lincoln Lawyer News

Critic Reviews for The Lincoln Lawyer

A much better version of this movie may exist somewhere in the editing-room blender, to be excavated by cine-archeologists of the future.

A solid thriller with McConaughey doing what he does best.

The Lincoln Lawyer is a well-crafted, well-cast adaptation of Michael Connelly's best-selling novel, shot on interesting Los Angeles locations. It's a crime thriller with...

It's nice to see McConaughey getting relatively serious instead of coasting through yet another witless romcom, with or without Kate Hudson.

The film does take some predictable turns - even with its "surprise" twist - but it's a perfectly enjoyable time killer.

Some fussy directorial touches don't seriously get in the way of a tricky plot with a suspenseful denouement and there's an excellent use of locations in the Los Angeles area.

The Lincoln Lawyer marks the beginning of what many at the time characterized as the 'McConaissance'.

The ultra-confidence swagger for which McConaughey is so well known works well here.

We don't ask much of our legal thrillers beyond a twisty plot and a good villain to watch go down, and Brad Furman's methodical thriller doesn't bother offering much more than that.

Viewers are treated to a top notch "who done it," mixed with a wonderful central character played by a never-better Matthew McConaughey, and sprinkled with dashes of street smarts and authenticity.

Entertaining, holds your attention, a great performance by McConaughey. Very refreshing as his past rom/com, leading-man roles have been just so-so.

The verdict is in. 12-0 in favor of The Lincoln Lawyer.

Debbie Lynn Elias
Behind The Lens
View All Critic Reviews (177)

Audience Reviews for The Lincoln Lawyer

This entertaining crime thriller is not very original but doesn't disappoint either, as it offers a pretty interesting plot with its typical, expected twists and some good performances - except, of course, Ryan Phillippe, who is mediocre and inexpressive as usual.

Great legal thriller with an excellent cast and plenty of twists. The major premise probably does not make all that sense but makes for an enthralling and entertaining case. Even if the final revelation falls a bit short, McConaughey makes it worth your time.

A magnificent courtroom drama/thriller that serves with the same extremities as the hammer of justice. The Lincoln Lawyer is mostly held up by the enigmatic performance from McConaughey as well as the supporting cast. With it's courtroom splendor and gritty thrills, the film is extraordinary. 4/5

Good adaptation of a great book, better than I would have expected and a sign of good things if the rest of the Mickey Haller books get made into movies. Now we just want to see a Harry Bosch movie.