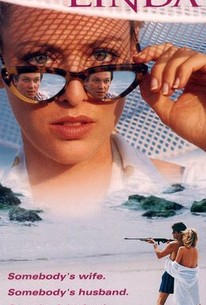 "Her charms deceived him. Her evil betrayed him. Now only the truth can free him." The ad copy for the made-for-cable Linda only scratched the surface, but it did capture the gist of the story. Richard Thomas plays a nebbish who takes a Florida vacation with his restless wife Virginia Madsen. Before they can slap on the sun block, Thomas and Madsen becomes involved with another couple, played by Ted McGinley and Laura Harrington. A murder ensues, and Thomas is fingered as the most likely suspect. There's many a James M. Cain-ish plot twist before Thomas -- and the audience -- learn which end is up. Linda debuted October 8, 1993, on the USA cable network.

All actors put in good performances, but of special note is McGinley, whose sudden changes in emotion are believable and work well.

There are no featured reviews for Linda at this time.