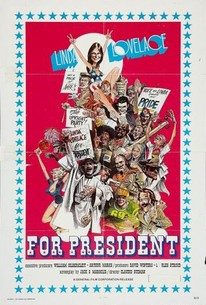 Voter apathy in the United States is at an all-time high, and the general consensus of the American attitude is that there simply isn't anyone worth voting for. A multi-ethnic, politically diverse committee comes together to name a new candidate that America can really get behind. When someone jokingly suggests famous porn star Linda Lovelace, the committee members realize that it isn't such a crazy idea after all ("At least she knows how to use her head!"). Lovelace agrees to run for president, the Upright Party is formed, and a cross-country campaign tour is launched. Her journey is full of ribald adventures in small towns, big cities, and rural spots along the highway, and she's loved by the people everywhere she goes. Unfortunately, that makes the Dirty Guys in Washington upset, so they send for The Assassinator (Chuck McCann) to make sure that Lovelace doesn't live to claim her rightful spot as leader of the free world. This wacky softcore sex farce features an assortment of celebrities in cameo roles, including Micky Dolenz, Scatman Crothers, Joe E. Ross, and Vaughn Meader.

This is an unsuccessful film that completely lacks jokes, except in one or two occasions. [Full Review in Spanish]

A testament to the Right's continued attempts to slap a chastity belt on pop.

There are no featured reviews for Linda Lovelace for President at this time.