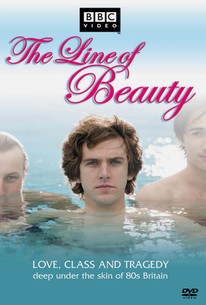 Award-winning screenwriter Andrew Davies adapts author Allan Hollinghurst's Booker Prize-winning novel for the screen with this three-part saga of love, sex, class, and money set against the backdrop of the Thatcher era. As the conservative government rises to power in the turbulent 1980s and four years of tragedy and transformation are set into motion, a young gay male living in Britain experiences everything from the ecstasy of falling in love to the agony of the emerging AIDS epidemic. ~ Jason Buchanan, Rovi

News & Interviews for The Line of Beauty

How Well Do You Know Legion Star Dan Stevens? Take the Quiz

View All The Line of Beauty News

Critic Reviews for The Line of Beauty

Audience Reviews for The Line of Beauty

Well acted BBC drama of a time of great change in England, one of the problems is that most of the characters are so unsympathic and unlikeable that its difficult to engage with the story and the ending is awfully abrupt,

The Line of Beauty Quotes